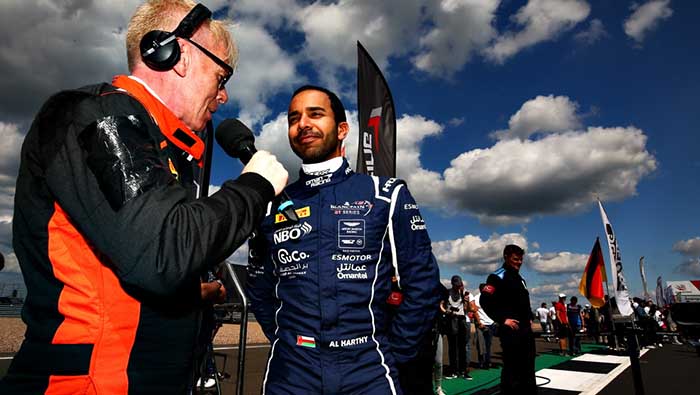 Belgium: Championship challenging Blancpain Endurance Cup driver Ahmad Al Harthy and his Oman Racing team return to track action this week, at Spa-Francorchamps in Belgium, for two days of officially timed testing ahead of the biggest race of the season – July’s Total 24 Hours of Spa.
Muscat sportsman Al Harthy, who is bidding for his second Pro-Am title this year in the globe’s biggest and best GT3 endurance racing category, says he can’t wait to be back at world-famous Spa to put the No.97 Aston Martin Vantage through its paces.
The upcoming fourth round of the Blancpain season in Belgium is, of course, the championship’s blue riband event and one of the globe’s flagship twice-round-the-clock encounters. Indeed, in 2017 it was where Al Harthy and Oman Racing sealed the Pro-Am crown with second in class in the race.
For the big two-day test at Spa on Tuesday, 2nd July, and Wednesday, 3rd July, Al Harthy is looking forward to being back behind the wheel and utilising the track time available to prepare as strongly as possible for the notoriously challenging race at the end of next month.
It’s certainly been a very strong and consistent season so far for the Omani, who is backed by National Bank of Oman, Oman Ministry of Sports Affairs, Omantel and Barr Al Jissah, and along with team-mates Charlie Eastwood and Salih Yoluc he has taken podium finishes in all three races thus far.
Starting with third in Pro-Am at Monza in Italy back in April, during round two at Silverstone GP Circuit in the UK the trio raced to a season-best second place and then added third again last time out at Paul Ricard in France, during the six-hour ‘into the night’ race, to move into the points lead.
As well as the superb consistency and reliability in the races this year, both key aspects of any successful campaign in Blancpain, Oman Racing’s pace in qualifying has also been standout with the team securing three pole position starts in a row in Pro-Am up to now.
“I can’t wait to be back in the car for the two-day test at Spa, it’s always great to be back there and it is a track where Oman Racing has many happy memories”, said Al Harthy, “It’s been a fantastic season for us so far with the new Aston Martin, the guys at TF Sport [the engineering strength behind Oman Racing] have been doing an amazing job and the car has been great to drive.
“This week’s test is going to be hugely important, the preparations we do there for the 24-hour race will be key to our challenge for another podium. It’s never easy in Blancpain, far from it, but we’re delighted with the level of performance we’ve shown so far and our bid for a second championship at this level is very much on course.”
Highly rated Danish GT3 ace Nicki Thiim joins Oman Racing for 24hrs
For the Total 24 Hours of Spa, Oman Racing is expanding to a line-up of four drivers and the team is thrilled to welcome hugely successful, and very highly rated, Aston Martin ‘works’ driver Nicki Thiim to the fold.
Danish racer Thiim, a winner at the Le Mans 24 Hours and a class winner in the FIA World Endurance Championship, will join Al Harthy, Eastwood and Yoluc for Blancpain’s biggest event and brings a huge experience which will prove massively beneficial.
Additionally, the flamboyant 30-year-old knows Tom Ferrier’s TF Sport crew very well indeed as a current driver for the team in the British GT Championship and having enjoyed podium success with the squad in the European Le Mans Series.
Commenting on the arrival of Thiim at Oman Racing, Al Harthy added: “We’re obviously very excited to welcome Nicki for the 24 hours and I can’t wait to begin working with him. His vast experience at the highest levels of GT3 endurance racing, as well as his many successes, speak volumes and he is certain to be a major asset for Oman Racing.”
Following the two-day test at Spa this Tuesday and Wednesday, round four of the Blancpain Endurance Cup – the Total 24 Hours of Spa – will take place over the weekend 27th/28th July.