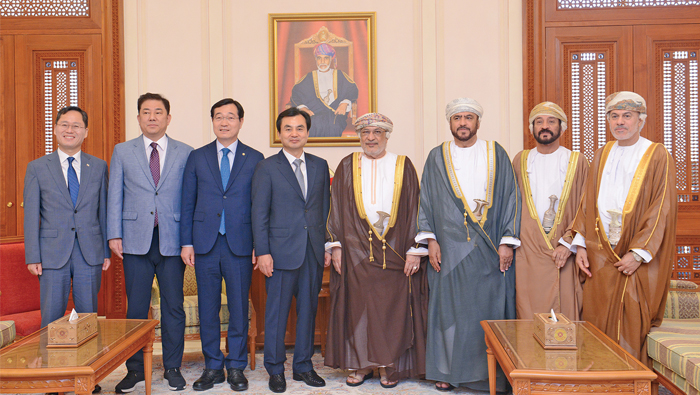 Muscat: The State Council Chairman, Dr. Yahya bin Mahfoudh Al Mantheri received Ahn Gyu-Back, Chairman of the National Defence Committee from the Democratic Party of Korea in the Korean National Assembly and his accompanying delegation on Tuesday as part of his current official visit to the Sultanate.
Dr. Yahya bin Mahfoudh Al Manthrei praised the relations between the Sultanate and South Korea and the citizens of both nations, the progress that they have witnessed and noted the promising prospects of such relations in the interests of the two countries.
He also mentioned in this regard the visit of the President of the National Assembly of the Republic of Korea to the Sultanate earlier, which played an important role in supporting relations between the two friendly countries, especially in the parliamentary fields.
During the meeting, ways of supporting bilateral cooperation between the two countries in various fields were reviewed, particularly in the parliamentary aspects.
Ahn Gyu-Back,expressed his pleasure to visit the Sultanate, which comes within the framework of keenness to push the relations between the Republic of Korea and the Sultanate to wider horizons and noted the promising opportunities to expand cooperation between the two friendly countries in technical, industrial, and other fields.
He expressed the interest of the Korean National Assembly in developing its relations with the Council of Oman and praised the practice of Shura in the Sultanate and the advanced level it has reached.
The guest and his delegation witnessed a documentary film about the process and stages of the development of the institutional practice of shura in the Sultanate and the role of the State Council in national action.
The council members Hon.Yahya Rasheed Rashid Al Juma’a, Hon. Mahfoodh Hamood Mohamed Al- Wahaibi and KIM Chang Kyu, Ambassador of South Korean to the Sultanate of Oman, attended the meeting.
The delegation visited the facilities at the council building and viewed the documentary depicting the evolution of the Shura March and the contribution of the State Council to national action.