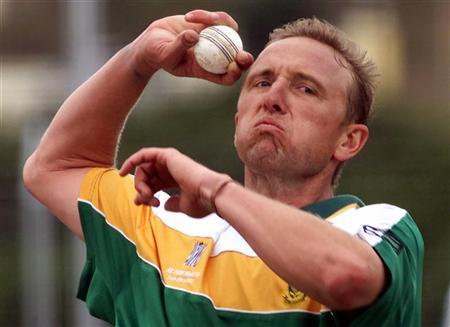 Melbourne: South Africa fast bowling great Allan Donald will join Australia as bowling coach for their tour of Sri Lanka this year, local media reported on Wednesday.
The 49-year-old, who took 330 test wickets at an outstanding average of 22.25, could then stay on as part of the top-ranked test nation's coaching team for series against Pakistan and South Africa in the coming home summer, News Ltd media said.
Cricket Australia declined to comment on the report but a team spokeswoman said the governing body hoped to have the coaching set-up for Sri Lanka settled within a "week or so".
Craig McDermott, who helped guide Australia to victory in last year's World Cup and a 5-0 whitewash of England in the last Ashes series on home soil, stepped down as bowling coach after the World Twenty20 in India.
Donald, nicknamed 'White Lightning' during a 72-test career from 1992-2002, stepped down as bowling coach of South Africa a year ago, after four years mentoring the Proteas' feared pace battery of Dale Steyn, Vernon Philander and Morne Morkel.
After Australia's two-test tour of Sri Lanka in July and August, Donald was expected to remain in the post for a one-day series in South Africa, News said.
Darren Lehmann remains Australia's head coach across the three formats but the make-up of his staff remains unsettled.
Batting coach Michael Di Venuto departed last month to take up a post with England county side Surrey, with former test batsman Greg Blewett stepping in temporarily.
Justin Langer, widely tipped to be Lehmann's successor, is to guide the side during a one-day tournament against West Indies and South Africa in June to give Lehmann a break before the Sri Lanka tour.
Langer will be assisted by Western Australia bowling coach Adam Griffith and former England batsman Graeme Hick in the Caribbean.
cricket Australia also announced on Wednesday the country's top men's coaches, including Langer, Blewett and Hick, would head to the United States at the end of June on a study trip to learn from leading sports teams, companies and media outlets.
Apart from Major League Baseball's San Francisco Giants, the coaches will also engage with Silicon Valley giants Apple, Google and Facebook.