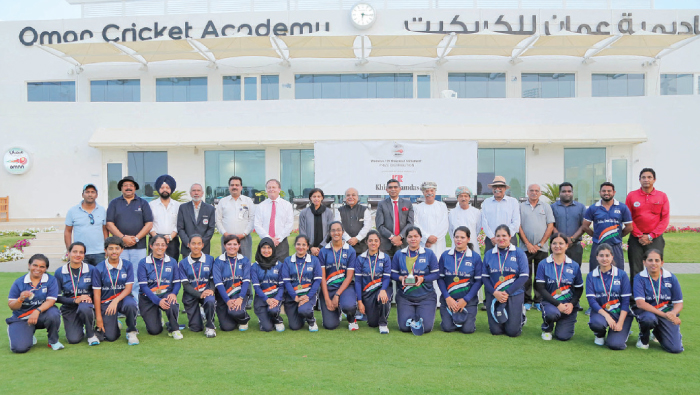 Muscat: A magnificent all-round performance by Jayadhanya Gunasekar powered Indian Social Club to 65-run victory against Indian School Muscat in the final of Women’s T20 Knockout final at Oman Cricket’s grassy ground two on Monday. After the final, the teams and the top performers were presented awards and trophies by Munu Mahawar, Indian Ambassador to Oman, who was the chief guest and Yunus Sakhi, member of Oman Cricket’s Advisory Committee, who was the guest of honour.
Invited to bat first, ISC Women scored 112 for 6 in 20 overs thanks to superb 50 by Jayadhanya including six hits to the boundary.
Coasting at 36 for 2 in the 7 th over, ISM saw a dramatic batting collapse ruin its run chase and the whole side was dismissed for 47 in 13.2 overs. Kashish Deep Jaywant topscored with 17. Jayadhanya was also the most impressive ISC bowler, taking two wickets without conceding a run in her 3 overs, which were all maiden.
Merito Pinto and Suhani Dadwal bowled well too, taking two wickets each.
ISC captain Truti Pawde received the winner’s trophy from the chief guest while Jayadhanya, adjudged player of the match, received her prize from the guest of honour.
Brief scores (Women’s T20 Knockout Final): ISC Women 112 for 6 (Jayadhanya Gunasekar 50 – 6x4, Suhani Dadwal 13) trounced ISM Women 47 all out in 13.2 overs (Kashish Deep 17 – 2x4. Jayadhanya Gunasekar 2-0, Merita Pinto 2-14, Suhani Dadwal 2-15) by 65 runs.