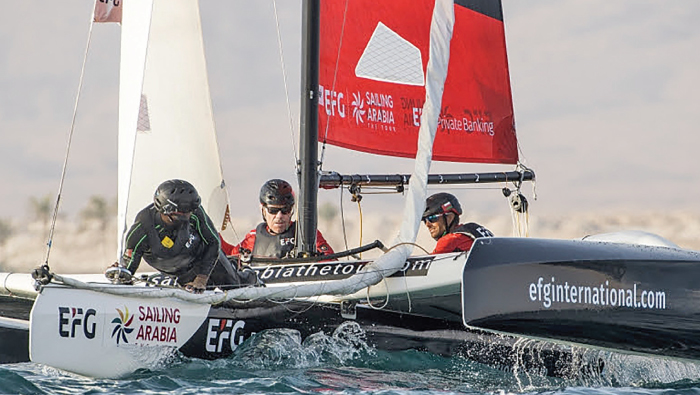 Muscat: Four Oman Sail teams have made a strong start to their European racing campaigns at the large international Spi Ouest-France regatta on France’s west coast. All four raced in the high-speed Diam 24 trimaran class against world-class crews, many of whom they had competed against at EFG Sailing Arabia – The Tour in Oman earlier this year.
Leading the Oman Sail contingent was EFG Private Bank Monaco who claimed a third place podium position in the 28-strong fleet, just two points off the
second spot.
French Olympic sailor Pierre Pennec had stepped in as skipper in place of Oman Sail team leader Franck Cammas, who did not race for medical reasons and sailed alongside Hussein Al Jabri
and Corentin Horeau.
Just two points behind them in fourth was Oman Sail’s Renaissances Services entry, skippered by another Olympic racer, Britain’s Stevie Morrison, with crew Quentin Ponroy, Abdul Al Mashari and Raad Al Hadi.
Light winds limited the Diam fleet to just eight races in challenging conditions across four days, but the other Oman Sail
teams also posted consistent results.
The all-Omani Team Oman Sail crew of Akram al Wahaibi, Haitam al Wahaibi and Yasser al Rahbi came home in 19thplace overall, while the all-women Sailing Arabia The Tour team of skipper Audrey Ogereau and crew Maelenn Lemaitre, Ibtisam al Salmi, Marwa al Kaifi and Tami Al Balushi were 22nd.
“The teams are coming together very well and working with each other ashore,” said Morrison. “On the race course we are all racing each other and there are no team orders, let’s put it that way, but when we come ashore we are all friends and we have four different opinions on what was good and not good on any given day, so we can work together and make sure that all four teams get better.
“We have two teams going out to win the Tour Voile in July and two teams looking to progress and get some top results as the season goes on.”
Oman Sail’s teams have already tasted action, taking part in the Grand Prix Atlantique earlier in April. EFG Private Bank Monaco took fifth place in the 18-strong Diam fleet with Renaissances Services also qualifying for the gold fleet, finishing ninth overall. Team Oman Sail and Sailing Arabia The Tour posted some strong results on the way to 16thand 17thplaces respectively.
Meanwhile, Oman Sail’s two Figaro 3 teams got their season underway recently at the Sardinah Cup event based at
Saint Gilles, also on France’s west coast.
Long-standing Oman Sail racer Sami Al Shukaili sailed in the two-handed event with Nicolas Lunven, twice winner of the classic Solitaire du Figaro event, taking a top-10 finish in the first of three offshore races and eventually finishing 15thoverall in a highly competitive 34-boat fleet.
The second team of Ali Al Balushi and experienced French yachtsman Julien Villion were handicapped after having to pull out of the second Sardinah Cup race for technical reasons and finished their first ever Figaro event in 29thplace.
In what is a development year for Oman Sail’s Figaro project, the Omani sailors will not be racing in the single-handed Solitaire du Figaro event but will take part in several fully-crewed races such as the Tour de Belle Ile, Armen Race, Trans Manche, the La Trinite Cowes and Cowes-Dinard races, and the Tour de Bretagne through the season.