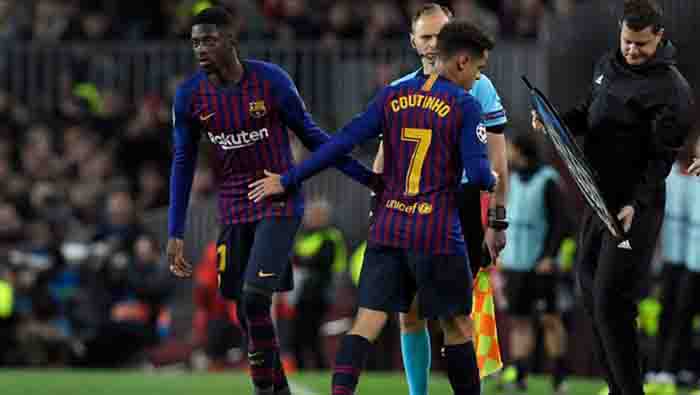 Barcelona: Both Ousmane Dembele and Philippe Coutinho will be at Ernesto Valverde's disposal for the UEFA Champions League quarter-final second leg against Manchester United.
The Barcelona coach will have to pick which one he wants to play alongside Lionel Messi and Luis Suarez in attack.
The Frenchman has fully recovered from his injury and started the Catalan side's 0-0 draw at Huesca last Saturday.
Meanwhile, the former Liverpool playmaker had a positive performance at Old Trafford, giving Valverde a pleasant headache with regard to whom he should start tonight.
Before getting injured, Dembele had firmly secured his spot in the starting line-up, but Coutinho managed to fill in for the 21-year-old despite some unconvincing performances.
Should Valverde favour a more defensive approach against the Red Devils, Arturo Vidal could feature in the midfield, switching from a 4-4-3 system to 4-4-2, the Spanish MARCA newspaper reported.