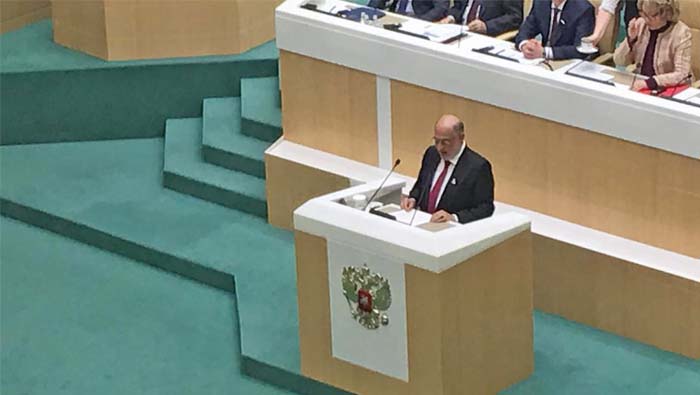 Moscow: Dr. Yahya bin Mahfoudh Al Mantheri, Chairman of the State Council affirmed the growing relations of friendship between the Sultanate and the Russian Federation since their establishment in 1985.
He said in a speech before the Federation Council of the Federal Assembly of Russia that the relations between the two countries continue developing at a good pace based on mutual respect, coordination and cooperation at various levels.
He pointed out that the real indicator for the excellence of these relations is the state of satisfaction and positive impression from both sides.
“The Omani-Russian relations are strengthened through mutual visits which witnessed intensive activity in recent years between senior officials of the two friendly countries, not only at the political sphere, but also covering the economic, cultural, tourism, parliamentary and other fields”, he said.
Stating that his current visit to Russia stems from this perspective, he expressed his hope that this visit would be a new enrichment point for the relations of friendship between the two countries in the parliamentary dimension.
Addressing the Federation Council of the Federal Assembly of Russia, the State Council Chairman said that the stances of the Sultanate of Oman and the Russian Federation on many international and regional issues always seek to support constructive dialogue among different countries as the only effective way to address and solve many crises and international issues.
He pointed out that the efforts of the Sultanate through Oman Air have been successful in operating direct flights between Muscat and Moscow starting in October 2018, stemming from total confidence that the operation of such flights contributes effectively to facilitate the movement of citizens of both countries.
Within the framework of the visit of the State Council Chairman and his accompanying delegation to the Russian Federation, Dr Al Mantheri and the accompanying delegation visited the Moscow Kremlin State Historical and Cultural Museum during which they toured the museum and learned about its archaeological artefacts.