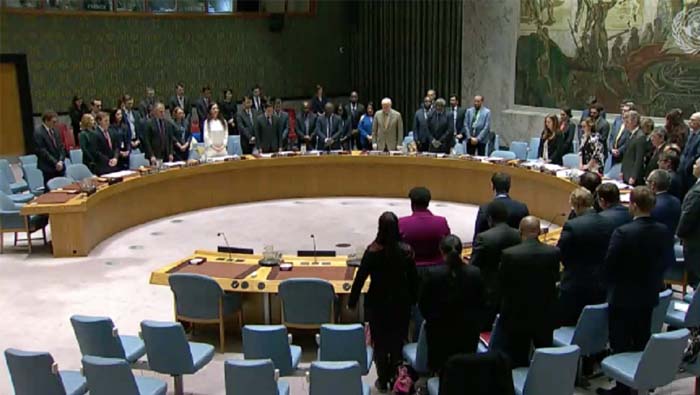 Rabat: The Organisation of Islamic Cooperation (OIC), the Arab Parliament and the Gulf Coopertion Council (GCC) member states were joined by other countries of the world in condemning the New Zealand terror attacks in which 49 people were killed.
Secretary General of the Organisation of Islamic Cooperation (OIC) Youssef bin Ahmed Al Othaimeen condemned the attacks against innocent Muslims, who were praying at Al Noor and Lindwood Mosques, in Christchurch City, New Zealand on Friday, which resulted in the death of nearly 40 individuals injured many others.
While expecting that the attacker would be charged with the severest punishment, Al Othaimeen urged the New Zealand authorities to hold an immediate and thorough investigation on this vicious attack.
He further urged the New Zealand government to provide more protection to the Muslim communities living in the country.
Prince Mohammed bin Salman bin Abdulaziz Al Saud, Crown Prince, Deputy Prime Minister and Minister of Defence sent a cable of condolences to the Governor-General of New Zealand Dame Patsy Reddy, on the victims of the two terrorist attacks, targeting two mosques.
The Saudi Shura Council, too, condemned the two terrorist attacks and emphasised importance of a joint action to combat terrorism and uproot it
The sentiments were echoed in the responses of the leaders of other GCC countries too.
The Islamic Educational, Scientific and Cultural Organization (ISESCO) strongly condemned the terrorist shootings and appealed for solidarity with Muslims in New Zealand and expressed its confidence to take the necessary measures to punish terrorists and protect mosques and Muslims on its territory. The Arab Parliament has condemned in the strongest terms the cowardly terrorist attack at two Christchurch mosques in New Zealand, on Friday, which left 49 people dead and scores other seriously injured.
“These treacherous and cowardly terrorist acts carried out by racist criminal groups are a heinous crime that is contrary to all divine laws and human values,” said Dr. Mishaal bin Fahm Al-Salami, Speaker of Arab Parliament, in a statement. “They are repugnant hatred and racial discrimination against Muslims.”
The shootings on Friday claimed the lives of 49 people. Muslim Council of Elders has denounced the terrorist mass shootings at two mosques in New Zealand, which killed nearly 50 people and injured dozens on Friday morning.
UNSC member states condemned in the strongest terms the heinous and cowardly terrorist attack that took place at Al Noor Mosque and Linwood Mosque in Christchurch, New Zealand.
'The members of the Security Council expressed their deepest sympathy and condolences to the families of the victims and to the Government of New Zealand and they wished a speedy and full recovery to those who were injured,' the statement reads.
It added 'the members of the Security Council reaffirmed that terrorism in all its forms and manifestations constitutes one of the most serious threats to international peace and security.'
Underlining the need to hold perpetrators, organizers, financiers and sponsors of these reprehensible acts of terrorism accountable and bringing them to justice, the UNSC members urged all States, in accordance with their obligations under international law and relevant Security Council resolutions, to cooperate actively with the Government of the New Zealand and all other relevant authorities in this regard.
Head of the Catholic Church Pope Francis in a message expressed sympathy with New Zealanders especially the Muslim community over the Friday deadly attacks on two mosques.
A message sent by a senior Vatican official on his behalf said that ‘Pope Francis was deeply saddened to learn of the injury and loss of life caused by the senseless acts of violence at two Mosques in Christchurch.’
The message also said that the Pope ‘assures all New Zealanders, and in particular the Muslim community, of his heartfelt solidarity in the wake of these attacks.’
He also ‘prays for the healing of the injured, the consolation of those who grieve the loss of their loved ones, and for all affected by this tragedy.’
According to Italian media ‘ANSA’, Italy’s President Sergio Mattarella said that Christchurch terror attack on two mosques was ‘an extremely serious signal of alarm’.
He also referred to the names written on attackers’ weapons such as Luca Traini, an Italian extremist who had earlier shot every immigrant in Macerata and also the name of a Canadian who killed Muslims in a mosque.