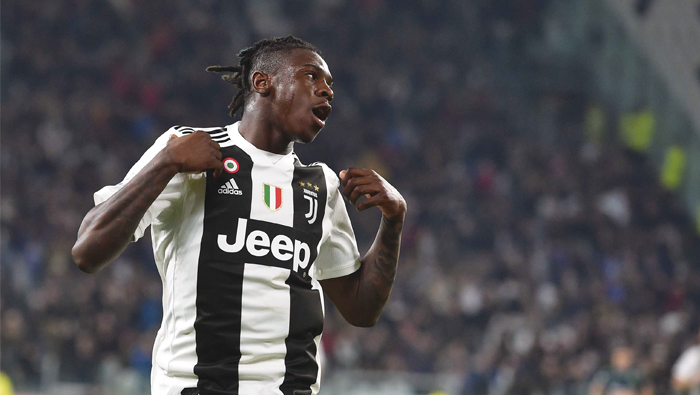 TURIN: As Juventus’ theme song, ‘Storia Di Un Grande Amore’, echoed through the walls of the Allianz Stadium, lights danced to its rhythm, and fans enthusiastically sang along - pledging their loyalty to the club “of a great love.”
This electric pre-match show only set the tone for what was to come; an emphatic 4-1 victory over lowly Udinese, spearheaded by an unheralded star in Moise Kean.
Moise Kean, the 19-year old, who had only managed a combined three Serie A minutes in two matches as a substitute this season before Friday, made the most of his first start and earned a standing ovation by scoring a brace and winning a penalty for the third goal, which was scored by Emre Can, before being replaced in the 80th minute. At the age of 16, Kean became the first player born in 2000 to play in the Serie A, when he made his debut for Juve in November 2016. In the same month he also became the first footballer born in this millennium to appear in the Champions League.
Blaise Matuidi headed in the fourth goal for the home team in the match which was of no consequence, before Kevin Lasagna secured a consolation for the visitors. It was obvious that Juve fans had come to relax and enjoy themselves on a night of no pressure or tension, one that did not need their star player, Cristiano Ronaldo coming to the rescue. They chanted, clapped, roared and jumped at intervals as the straightforward script played out beautifully before their eyes.
With 16 points above second-placed Napoli heading into the game, even a loss could have altered little in Juve’s hunt for a record-extending eighth consecutive Serie A crown. At this stage, only an extraordinary circumstance can deny them the Scudetto. Although winning the league unbeaten - like in the 2011/12 season - would be even more spectacular.
However, the atmosphere created on Friday will, most importantly, help boost the confidence of Massimiliano Allegri’s team ahead of Tuesday, when they would have a bigger fish to fry at the same stadium if they must keep their hope of a UEFA Champions League title alive. Following, a 2-0 loss to Atletico Madrid away from home in the first leg, Juventus are on the verge of exiting Europe’s biggest club football competition, but they have a chance to flip the script in front of their fans when Atleti comes visiting.
Everyone knows that Ronaldo was signed last summer for this purpose of conquering Europe. He and other key players like Giorgio Chiellini and Mario Mandzukic were rested against Udinese ahead of the crucial quarter-final tie that could ultimately define their season. They have already failed in their Coppa Italia title defense in January after suffering a shock 3-0 loss to Atalanta in the quarter-finals, bringing to an end their quest for a fifth successive domestic double.
Speaking at the post-match press conference after the match against Udinese, Allegri accused journalists of putting pressure on his team to win the Champions League. For him, the season would not be a failure if they end up not winning it. He said: “We’ll do everything to win and if we do - great, if we don’t, well that’s football. We’ll try again next year. And if you call that a failure - I disagree.”
Allegri remaining as Juventus coach by next season might be dependent on what happens in the Champions League but the fans will always have their place at the club. They will turn up again at the stadium on Tuesday. This time, however, a tense atmosphere is expected as they hope that by the time the final whistle is blown they would have overturned the result of the first leg against Atleti to qualify for the last eight of this season’s Champions League.
Moise Kean of Juventus celebrates after scoring his second goal during the Serie A match between Juventus and Udinese at Allianz Stadium on March 08, 2019 in Turin, Italy. (Photo by Tullio M. Puglia/Getty Images)
Chibuogwu Nnadiegbulam, AIPS Young Reporter, Nigeria