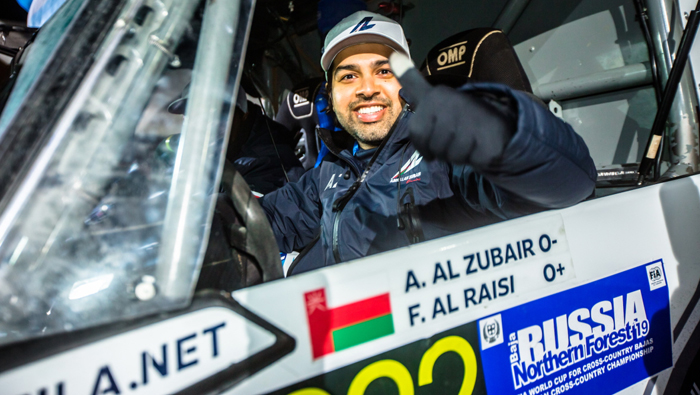 Muscat: Fresh from a sensational podium result in the snow-filled forests of Russia this past weekend, Omani rally driver Abdullah Al Zubair returns to action in a much more familiar climate today for the opening round of the FIA Cross Country Rally World Cup season in Qatar.
Just a couple of days after arriving back from Russia, where Al Zubair and AZ Racing co-driver Faisal Al Raisi finished second in class in the first Cross Country ‘Baja’ event of the year, the former is relishing getting his second 2019 championship underway and determined to secure more silverware.
For AZ Racing’s first desert rally of the year, and for the next three events, Qatari co-driver Nasser Al Kuwari joins Al Zubair and brings huge experience and knowledge to a rally renowned as providing perhaps the most difficult navigational challenge of any. Importantly, of course, Al Zubair’s talent in desert rallying is proven too having won a shorter ‘Baja’ rally in the state last year.
Getting underway with the initial scrutinising checks tomorrow, the Manateq Qatar Cross Country Rally will reach its conclusion next Tuesday, 26th February, where AZ Racing plans to be celebrating more success with its South Racing-built BRP Can-Am Maverick X3 ‘rally raid’ vehicle.
From the freezing cold sub-zero temperatures of Russia mere days ago, Al Zubair is looking forward to the warmth of Qatar and carries an immense amount of confidence into the event after turning a lot of heads on his maiden snow rally last weekend.
Abdullah Al Zubair: “I’m very excited to be back competing so soon after Russia and really looking forward to getting our FIA Cross Country Rally World Cup campaign underway. Obviously we’re going to miss Faisal, who has to miss the next three events, but we have a very capable and extremely professional replacement in Nasser. Qatar is the most difficult rally in the world in terms of navigation so Nasser’s role will be extremely important.”
Nasser Al Kuwari: “I am very happy to be joining Abdullah and AZ Racing and looking forward to forming a winning partnership. This will be my fourth Qatar Cross Country Rally in a row and, up to now, I’ve always been on the podium in second or third place. I am confident of Abdullah’s speed and driving skills, as well as my navigation skills and knowledge of my home race. Hopefully we can secure a win.”
Leg One of the first FIA Cross Country Rally World Cup event of 2019 will get underway in Qatar at 11.00 (local time) on Friday, 22nd February, with Leg Two following on 23rd February, Leg Three on 24th February, Leg Four on 25th February, and the final Leg on 26th February.