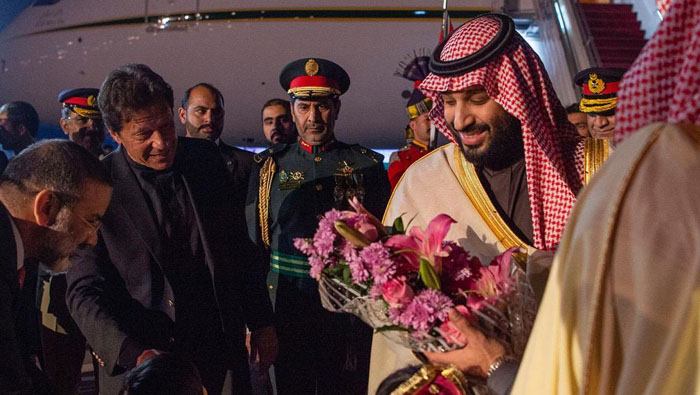 Islamabad: Foreign Minister Shah Mahmood Qureshi said that Saudi Arabia is investing $20 billion in various sectors of Pakistan in first phase.
Addressing a joint news conference along with Saudi Minister of State for Foreign Affairs Adel Al Jubeir in Islamabad on Monday, he said seven MoUs have been signed with Saudi side and more will be signed soon.
Foreign Minister appreciated Saudi acceptance of Pakistan’s long-standing demand of reduction in visa fee for Pakistani nationals. He said reduction in visa fee for Pakistanis will facilitate the people who will proceed to Saudi Arabia for various purposes.
He said it has been decided to set up Supreme Consultative Coordination Council to ensure structured institutionalised mechanism with regard to the implementation of MoUs.
He said the council will make action plan and oversee progress on the implementation of the MoUs.
He said Prime Minister Imran Khan has requested Saudi crown prince Mohammed bin Salman bin Abdulaziz Al Saud to look into the issue of providing facilities to Pakistani pilgrims to Saudi Arabia and the Pakistani citizens detained in Saudi jails and hopefully there will be an encouraging response from the Saudi side.
Speaking on the occasion, Saudi Minister of State for Foreign Affairs Adel Al Jubeir said relations with Pakistan are improving at every level. He said Saudi Arabia is extending cooperation to Pakistan in various projects. He said we want to see Pakistan as an economically stable and viable country.
Al Jubeir said we want to participate in Pakistan’s economic growth and share the vision of Prime Minister Imran Khan to take his country to new heights.
He said our investment in Pakistan is not charity and it is for mutual benefit of both the countries and their people.
Saudi Minister of State for Foreign Affairs said we have deep and historical relations with Pakistan.
He said there is a strong people to people cooperation between both the countries Replying to a question, he said terrorism is a common enemy and Pakistan and Saudi Arabia are on the same page to eradicate this menace.
Over 2,000 Pakistani prisoners in Saudi Arabia are set to be released following a request from Prime Minister Imran Khan, the country’s Minister of Information confirmed.
The move was announced during Crown Prince Mohammad bin Salman Al Saud’s visit to the South Asian country.
Minister Fawad Chaudhry said, “On the Prime Minister of Pakistan’s request, His Royal Highness the Crown Prince of Saudi Arabia Mohammad bin Salman has ordered the immediate release of 2107 Pakistani prisoners from Saudi jails.”
Pakistan’s Foreign Minister Shah Mahood Qureshi added, “Cases of the remaining (prisoners) will be reviewed. The people of Pakistan thank His Royal Highness for responding immediately to Prime Minister Imran Khan’s request.”
The Saudi leader was also given Pakistan’s top civilian honour, Nishan-e-Pakistan, by President Arif Alvi.