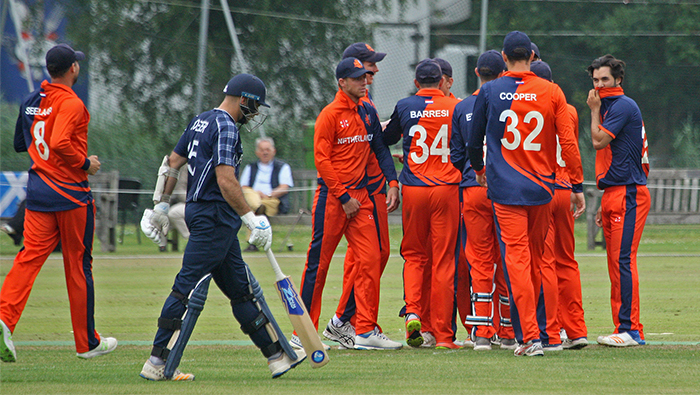 Muscat: Netherlands beat Scotland by seven wickets in the opening game of the quadrangular series at the Al Amerat Cricket Stadium, despite runs from MacLeod and Munsey.
After losing the toss and being put into bat, Scotland got off to an explosive start thanks to George Munsey’s 11-ball 32. Munsey’s knock propelled Scotland to 33 after the first two overs.
Despite the start, wickets tumbled into the third over with skipper Kyle Coetzer, falling for 1 (3) after being caught by Myburgh and bold by Snater after 2.1 overs.
Munsey soon followed, departing for 32 on 3.1 overs having been trapped lbw by Klaassen.
The two wickets brought two new batsman to the crease in Matthew Cross and Calum MacLeod, who managed a 3-run partnership before Cross fell in the fifth over for 5 (10) off the bowling of van der Gugten with 40 runs on the board.
MacLeod, who started his innings somewhat conservatively due to the flurry of wickets, was joined by Richie Berrington.
The pair put on a stand of 4 runs before Berrington departed for 2 (9) into the seventh over, having been removed by O’Dowd off the bowling of Seelar.
The loss of the fourth wicket brought Craig Wallace to the crease who shared a 50-plus partnership with MacLeod before being bowled by ten Doeschate after a handy 27 from 19. Wallace, striking at 142.10, hit two 4s and one 6 in his innings before departing with 97 runs on the scoreboard.
Determined to continue rebuilding the innings at the back-end of the 20 overs, MacLeod picked up the pace on his way to his gutsy 53 from 45. MacLeod shared a 39-run stand with Leask before departing after 17.5 overs with the score on 136, being bowled by van der Gugten.
Leask (11 from 11) soon followed MacLeod back to the dugout after being bowled by Klaassen after 18.1 overs, leaving Safyaan Sharif and Ruaidhri Smith to hit 17 runs before the end of the 20 overs, finishing the Scotland innings on 153-7.
Controlled fashion
In reply, Netherlands started their innings in a controlled fashion, picking up just two runs from Ali Evans’ opening over and five from Sharif’s at the other end.
The skipper brought Mark Watt into the attack into the third over, leaking two 4s and one 6 in the process. Netherlands’ opening batsman then went to take 67 runs from the next 8 overs without losing a wicket.
Myburgh and Visee put 100 runs on the board for no loss before the first wicket fell – Michael Leask claiming that of Myburgh (24 off 30) after 11.4 overs.
3 deliveries later, Sharif picked up Scotland’s second wicket, bowling Visee for a well made 71 from 43 with the score on 101-2 after 12.1.
The two quick wickets brought ten Doeschate and O’Dowd to the crease, who wasted no time with a 20-run partnership by the time Watt claimed his first wicket of the series – O’Dowd caught by Leask for 12 (9) with 14.3 overs of the Netherlands’ innings gone.
Despite needing 33 runs from the remaining 5.5 overs, Scotland’s attack built pressure after three quick wickets to take the game into the last over.
Bowled by Smith, Netherlands needed 4 runs from six deliveries with ten Doeschate and Barresi at the crease.
Bowling a wide first delivery, Netherlands needed just 3 runs from six balls. Barresi and ten Doeschate rotated the strike to pick up two singles and put Netherlands level on runs after 19.2 overs, before two dot balls followed from Smith to Barresi.
Barresi, facing up to the last ball of the innings, needed one run to win the game for the Netherlands.
Barresi picked up the winning run to kick off Scotland’s quadrangular series with a 7-wicket defeat.
Scotland face Ireland in the next game of the quadrangular series on Friday, February 15.

Caption: Scotland got off to an explosive start thanks to George Munsey’s 11-ball 32. Munsey’s knock propelled Scotland to 33 after the first two overs. Photo: Supplied