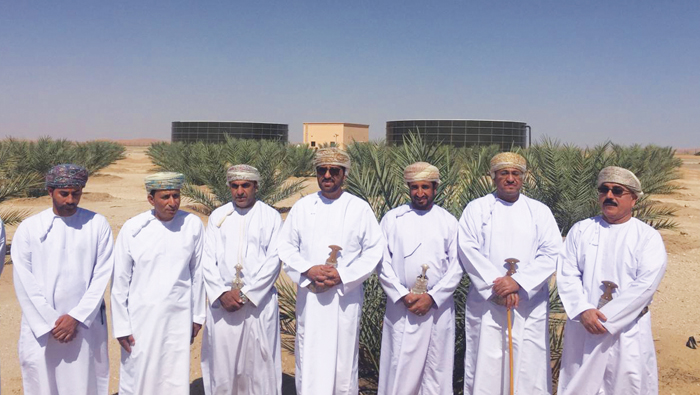 Muscat: Sheikh Saif bin Humair Al Malik Al Shehhi, Governor of Al Dhahirah, was briefed about Oman’s One Million Date Palms project, which saw the privilege of being visited by His Majesty Sultan Qaboos bin Said who had urged the establishment of palm-growing industries in the Sultanate, setting up of value added industries, and conducting research and studies aimed at developing palms in the country.
Al Shehhi listened to the presentation given by Dr. Saif bin Rashid Al Shaqsi, Director General of the One Million Palms Project, about the Al Safa Farm, which covers an area of 11 square kilometres, of which an area of 640 hectares is cultivated.
Al Shaqsi discussed the stages of the establishment of the farm, components of palm trees and modern irrigation methods used to irrigate them and the care they receive.
He spoke about the positive results achieved in the growing of palms in 11 farms across some of the governorates of the Sultanate. Some of them have got date crops. He also referred to the efforts made to establish companies to derive the benefits of palm derivatives and laboratories for studies and research, which are helpful in the palm industry.
Al Shehhi lauded the efforts made to implement the directives of His Majesty regarding the project, which has major economic and social value.
He said that the project was part of the framework of food security projects aimed at achieving self-sufficiency in many of the agricultural, animal and fisheries products in Oman.
He pointed out that these projects have a major role in enriching local communities and enhancing the added value of the palm.
“We saw the efforts made at the farm. This has filled our hearts with happiness due to the wonderful level at which Al Safa farm was established to promote palm cultivation in the Sultanate. The farm would support palm-based industries, create work opportunities for Omanis and small and medium enterprises,” said Al Shehhi.