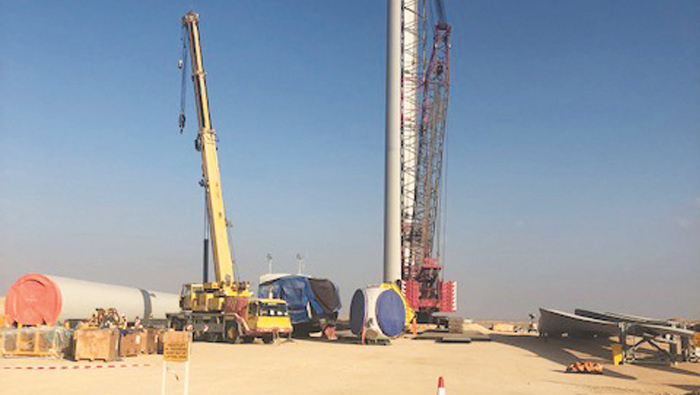 Shaleem and Al Halaniyat Islands: The completion of the construction work in the Dhofar Wind Power Project in Fatkheit area in the Wilayat of Shaleem and Al Halaniyat Islands in the Governorate of Dhofar reached 81 per cent.
The pilot operation is expected to start in the third quarter of this year. Eng. Saleh bin Nasser al-Rumhi, CEO of Rural Areas Electricity Company, said. “The project is the first of its kind in the Gulf region and is being built on a total area of 1900 ha, at a cost of about 100 million US dollars. The high voltage lines are estimated at 132 kV with the main network in the Governorate of Dhofar and will serve the subscribers linked to it.”
The CEO of Rural Areas Electricity Company said that the project is proceeding at a high rate. The installation of the fourth wind turbine has been completed in the project. The installation of the total 13 turbines will be completed by the end of March. The latest technological wind turbines suitable for the environment are used, with a capacity of 3.8 MW per turbine.
Dhofar Wind Power Project is the first of its kind in the Arabian Gulf region and is the result of a joint development agreement signed in 2014 between the Government of the Sultanate represented by the Rural Areas Electricity Company (Tanweer) and the Government of Abu Dhabi represented by Abu Dhabi Future Energy Company (Masdar).
The plant will have a capacity of 50 megawatts of clean electricity and meet the needs of about 16,000 houses in the Governorate of Dhofar. The project will help develop the regulatory, legal and technical framework to suit renewable energy technology, demonstrate the feasibility of wind technology in the Sultanate and address energy sustainability, and could save large quantities of gas that can be used in other industries.