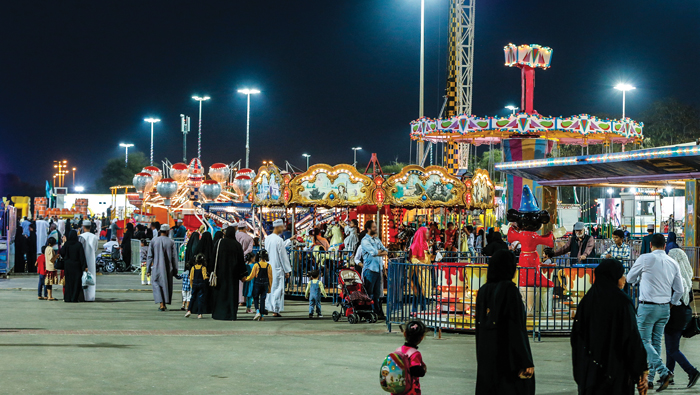 Muscat: A total of 389 children reported lost at the Muscat Festival this year have been reunited with their parents thanks to the hard work of on-the-ground festival workers.
Moreover, the implementation of a new technique of “identification using wrist bands” has significantly also helped reduce the number of children reported lost at the festival sites this year, as compared to last year.
Haseena Al Bulushi, an administrator at the Muscat Municipality’s media and awareness wing, told the Times of Oman that 389 children were reunited at the Muscat Festival in Amerat Park until Saturday.
Children who wander off are found by either Royal Oman Police (ROP) officers or citizens and brought to the information centre at the venue run by the Muscat Municipality.
Advisories
“Despite repeated advisories being issued to parents by the municipality, children who are lost appear at the office every day, and especially during the weekends,” said Al Bulushi.
She added that the number of children who were reported lost has gone down this year, as the municipality has been providing identity wristbands to children at the festival sites for free.
“The municipality is providing free wristbands at the festivals sites, which has led to the dip in the number of children reported lost this year, as compared to last year,” she explained.
With many attractions at the festival that are designed to appeal to all the members of the family, it does mean that children sometimes wander off on their own, while the adults visit places that appeal to them. This in turn could lead to the children not knowing their way around, especially if they are young.
Muscat Festival ends
The 2019 Muscat Festival ends on February 9, and activities are being held in both Amerat Park and Naseem Gardens. It began on January 10, but this is not the first time that authorities have asked people to take care of their kids while on the festival grounds. Last year, despite wristbands being given to children to ensure they were safe, as many as 30 children turned up every day, with no sign of their parents.
The wristbands contained important information, such as the number of the child’s parents, which could then be used by passers-by concerned to help children reunite with their families, in the event of them being lost. The number rose significantly over the weekends, and some children were unfortunately as young as two years old.
Shortly before this year’s Muscat Festival began, the ROP had also issued repeated advice to festival goers, asking them not to treat the information centres at the festival like a crèche.
“Some of the festival areas are not suitable for children,” Colonel Said Al Asmi, General Manager (operations) at the ROP, had previously said.
“It is very dangerous for them to be present there, especially without adult supervision. Parents who have lost their children will have their full names announced on loudspeakers to come pick them up at the festival avenue reception.
“Don’t leave your children unattended while heading to the festival sites,” he added. “You should keep your children safe while you are at the various locations at the festival. You can report any observations or any suspicious cases immediately and call the emergency number (999).”