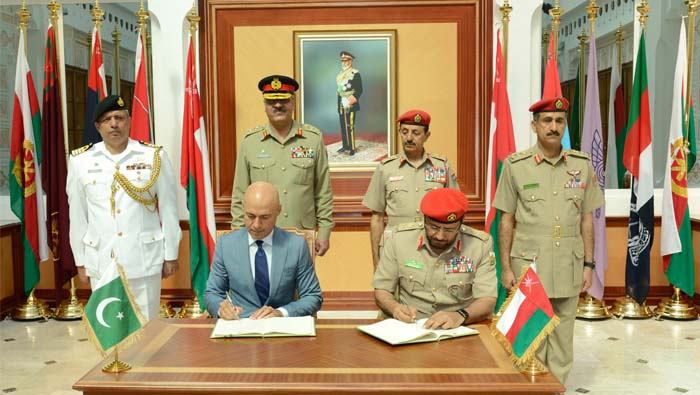 Muscat: General Zubair Mahmood Hayat, Chairman Joint Chiefs of Staff Committee in the Islamic Republic of Pakistan and his accompanying delegation visited the National Defence College (NDC) yesterday.
The Pakistani guest was accompanied during the visit by Lt. Gen Ahmed bin Harith al Nabhani, Chief of Staff of the Sultan’s Armed forces (SAF), Pakistani ambassador to the Sultanate.
They were received upon their arrival at the College’s HQs’ at Mu’askar Bait Al Falaj by Maj. Gen Salim bin Musallam Qatan, NDC Commandant. During his visit to the college, the guest and his accompanying delegation watched a film on the NDC and its academic facilities.
They also viewed the NDC’s various halls that are designed according to the latest specifications and provided with the best educational systems and multi-purpose electronic networks.
NDC Commandant and Ali Javed, ambassador of Pakistan to the Sultanate signed a Memorandum of Understanding (MoU) on the fields of academic cooperation and scientific research between the NDC and the Pakistani National Defence University (NDU).
The event was attended by Brigadier Mohammed bin Ya’arub Al Saifi, NDC Assistant Commandant, Brigadier Sulaiman bin Khalid Al Zakwani, Director General of Studies and Academic Affairs at the NDC and the Pakistani delegation accompanying the guest.