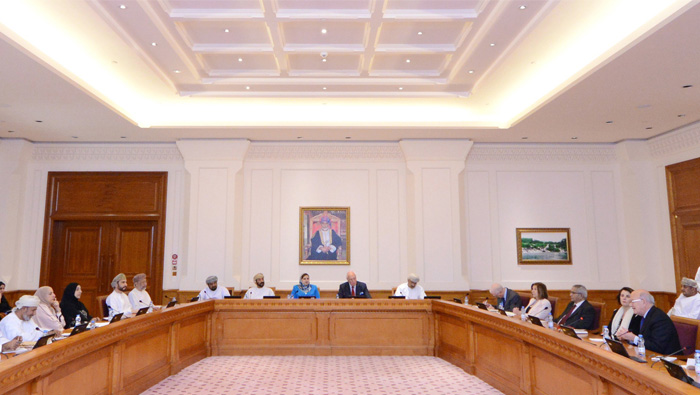 Muscat: A discussion related to legislative and supervisory work in the State Council and the House of Lords was discussed during a session on Monday.
A number of members of the State Council and a delegation of the House of Lords currently visiting the Sultanate on the invitation of the State Council were present during the discussion.
The session was opened by the Vice-Chairperson of the State Council, Dr. Suad Mohamed Ali Sulaiman Al Lawati, with a speech highlighting the legislative and supervisory powers and competences of the Council of Oman and the coordination and complementarity between the State and Majlis Al Shura to exercise these powers.
It touched upon the joint meetings, meetings of the bureaus of the two councils, as well as meetings of joint committees between the two Councils.
The unique features that are the hallmark of building the Council of Oman and its unique architectural design, which embodies the complementarity between the two councils, and includes the common halls and facilities that allow the coordination of efforts and complementarity in performance were pointed out.
The members of the State Council and the members of the British House of Lords discussed the topics of the session and the extent to which the work of the two councils is compatible with their powers.
They discussed the legislative process, the stages of discussion of the draft laws, the role of the panels in legislative work, and the most important topics were studied by the committees in both houses.
At the end of the meeting, they explored ways to enhance cooperation between the State Council and the House of Lords.