On the ball: ‘I always wanted to be like my father’, says Sunil Chhetri 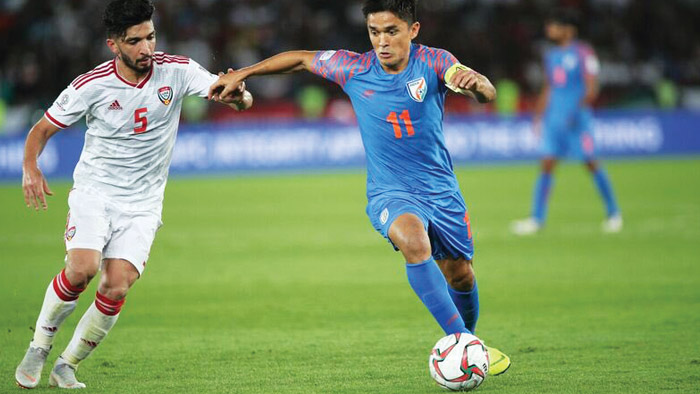 Indian national football team striker Sunil Chhetri has credited his parents for allowing him to pursue his passions and giving him the motivation to succeed.
Speaking at the 2019 Asian Cup, where Chhetri led the Indians, the 34-year-old said his parents’ willingness to expose himself to playing sports played a huge role in making him the player he is today.
Chhetri has scored 67 goals for India, ranking him second in the most number of international goals scored by any active player, having surpassed Lionel Messi when he plundered two goals in his country’s 4-1 win over Thailand.
Messi has 65 for Argentina, but Chhetri has some way to go before he can catch up with Cristiano Ronaldo, who has 85 goals for Portugal to his name, with Chhetri having surpassed the likes of Didier Drogba, Thierry Henry and Zlatan Ibrahimovic.
“There was a time when I wanted to be a cricketer, and Sachin (Tendulkar) was huge at that time, but it kept changing, you know,” said Chhetri, recalling his childhood. “After one week, you want to become Leander Paes, who is a legend in our country in tennis, and suddenly, after one week, you wanted to be Baichung Bhutia, so it kept changing every week, just like any normal kid.
“Thankfully, my parents understood it, and both me and my sister well allowed to express ourselves and say what we felt,” he added. “But if I have to take one name, I think my father, he would be the one that I always look up to, the one I always wanted to be like. He had a great influence, he had the right way of being a father at the time I needed a father, a guide, a friend, a critic, and he has done it brilliantly from then on and still continues to do so.”
Chhetri has spent the majority of his professional career in India, but has played overseas on two occasions. The first was in 2010, when he signed for Major League Soccer club Kansas City Wizards, while the second was when he spent a year with Portuguese side Sporting Club de Portugal in 2012, turning out for their reserve team.
Times were tough for Chhetri and his fellow footballers back then, but he has asked on today’s youngsters to seize the opportunities afforded to them, because they were not available to Chhetri’s generation of sportsmen.
“Now if you see every kid has access to any league he or she wants to watch, but when I was growing up, it wasn’t big, so (we had) little information, whatever we could gather, or (whatever) matches we could see,” he said.
Chhetri’s influences on the pitch are varied. They range from former Japanese midfielder Hidetoshi Nakata, who is considered to be one of the best Japanese players of all time, who was one of the first Asian players to go overseas, and played for teams as Roma, Perugia, Bologna, Fiorentina, Parma and Bolton Wanderers, to the Iranian duo of Ali Karimi and Ali Daei, both of whom played for German giants Bayern Munich.
As a young footballer, he also admired the talents of Arsenal legend and France top-scorer Thierry Henry, as well as Manchester United and Netherlands striker Ruud van Nistelrooy.
“Nakata was huge, man, he was one of the first ones to go abroad,” recalled Chhetri. “Ali Karimi was huge, Ali Daei was huge, but for us, it was more about domestic football. In my family, we are huge fans of IM Vijayan and Bhaichung Bhutia. Ronaldo, I was a big fan of, as well as Thierry Henry (and) Ruud van Nistelrooy. My mum was a big Steffi Graf fan, and we used to watch different sports also.”