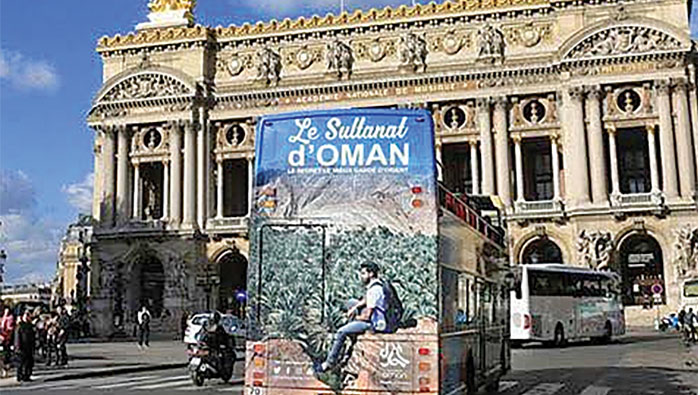 Muscat: Tourism representation offices of the Sultanate abroad are concentrating their efforts on promoting the tourism components of the country.
These 14 offices of the Ministry of Tourism are targeting the most promising and competitive tourism markets of the world to Oman.
These tourism representative offices are taking many important steps to put tourism in the Sultanate in the right perspective.
They are introducing new tourism products among operators and tourists and trying to establish the Sultanate as an emerging destination.
For this purpose, they are holding meetings, conferences and exhibitions and offering incentives to attract tourists by various means, including cruise ships.
These offices encourage independent adventure travellers with special interests such as biking, sailing, hiking or long walks, as well as tour groups interested in cultural tourism and families looking for leisure destinations on the beaches.
The promotional activities organised include trade fairs focused on tourism, presentations on attractive tourism destinations in the Sultanate, coordination with tour operators and travel agencies, advertising and organising introductory tour packages for travel agents, tour operators and journalists, as well as media campaigns and publishing articles on electronic platforms.
Training tour operators
They also train tour operators to respond to customers’ demands and motivate them to suggest a destination to their customers. The offices also send journalists to specific destinations in the Sultanate to highlight the country in their media, which include television and radio channels, as well as newspapers and magazines, which have a strong impact on the choices of the people.
Rania Khadhr, Director of the Ministry’s Foreign Tourism Representation Office in Paris, said that the office promoted tourism through advertising, which includes partnerships with airlines, hotels and tour operators in Paris.
“Campaigns increase awareness and the destination needs to be seen to connect with the people. For the purpose, photos and texts are used. This makes the work of promotion of tourism products of the Sultanate easier,” said Khadhr. She also said that the campaigns led to positive results. One of the secrets of the Sultanate in attracting tourists is the hospitality of its people. Other attractions include beautiful landscapes, diversity, a pristine coastline, a variety of tourism activities, safety and ease of travel.
The tourism representation office of the Sultanate in Italy is updating people with the latest information about travel agents, tour operators and hotels of the country through regular newsletters.
In addition to this, media organisations are also continuously provided information about the Sultanate through monthly press releases and individual communication.
This Italy office promotes the Sultanate through brand awareness and advertising campaigns. “In general, we believe that we are currently using effective promotional channels, and in future, we will focus on maximising every activity and identifying the right sectors that will have the greatest impact for access to the public and private sectors,” said the spokesman of the Oman’s tourism representation office in Italy.
Italy is currently the third largest market for tourists coming to the Sultanate, after the UK and Germany. It supports the growth of international tourism in the Oman.
He said that the promotional campaigns started showing results. The popularity of the Sultanate in the Italian market is evident from the growth in the number of tourists, which it received, in recent years. A whopping 35,984 Italian tourists reached Oman, registering a growth of 131.2% in the first quarter of 2018. This is in comparison to the same period last year when the Sultanate received 9,080 Italian tourists, which was an increase of 31% compared to the same period of the previous year. This is due to a multi-level strategy aimed at promoting the tourist destination for individual leisure and amusement seekers, as well as tourist groups, which are interested in culture. Last month, the Ministry of Tourism organised travel and tourism exhibitions in Rome and Milan to attract tourists from Italy. It showcased a number of major tourist destinations of Oman at these exhibitions.
“Through a Facebook page, we have built a direct relationship with nearly 23,000 followers who give feedback,” he said. In addition to this, the launch of www.experienceoman.com has helped attract tourists from European countries.
Similarly, the tourism representative office in the United Kingdom carries out digital marketing, as well as promotions through television, radio and theaters.
These campaigns focus mainly on the unique tourist attractions of Oman, from high mountains to wadis. The Sultanate has a lot to offer tourists looking for a unique holiday. Oman is a hidden jewel in the Arabian peninsula, combining ancient heritage with deep history and modern life. It is a place where one can explore a traditional market in the morning and attend a world-class show at the Royal Opera House Muscat in the evening.
There is also a focus on the Musandam Governorate, which is home to some natural landscapes in Oman, where the high mountains meet the sea with stunning straits and clean water, making this area one of the best diving spots in the world.
Khasab is a great base for exploring the Musandam peninsula, where visitors can enjoy natural scenes from the waters, starting with a tour on a traditional dolphin-watching boat.
The most important tourist attractions in Oman include the highest mountain peak - Jabal Shams - and Jabal Akhdhar, a mountain plateau famous for its green fields full of flowers, pomegranates and other fruits. There is also a beautiful coast near Ras Al Jinz, the farthest point in the east of the Arabian Peninsula, which is a place for nesting for endangered green sea turtles in the Indian Ocean. The Hoota Cave is another major attraction for tourists. The entrance to the Hoota Cave can be reached by a short electric train ride.