French government to rush through concessions for ‘yellow vests’ 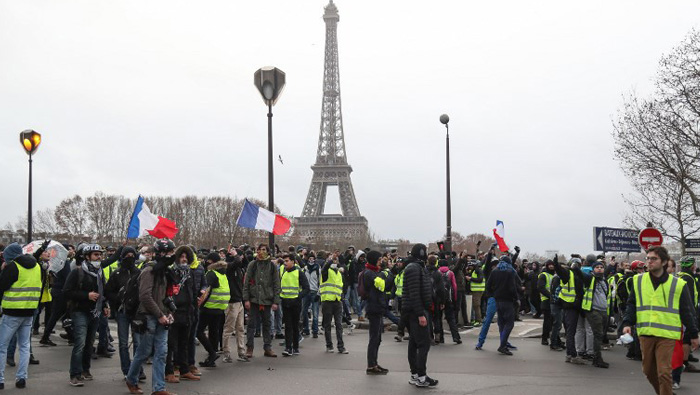 Paris: The French government is set to rush tax cuts and a rise in the minimum wage through parliament in a bid to end the “yellow vest” protests which appear to be waning after a month of disruption.
The measures announced a week ago by President Emmanuel Macron will be discussed at a cabinet meeting on Wednesday and put to the National Assembly and the Senate for votes before Christmas, officials said.
But in the meantime, the protesters must dismantle their road blocks, Interior Minister Christophe Castaner said on Monday, warning that “we can’t continue to paralyse the French economy.
Prime Minister Edouard Philippe has acknowledged that the concessions, worth some 10 billion euros ($11.3 billion), would mean France will breach the public deficit cap of 3 per cent of gross domestic product set by EU rules.
“We accept that there will be a small increase in the deficit because of more rapid tax reductions,” Philippe said in an interview in the financial newspaper Les Echos on Monday.
“But we are careful with government spending, and we are taking a series of measures touching on businesses and spending worth some four billion euros. That should allow us to hold the deficit at about 3.2 per cent for 2019,” he added.
A planned reduction in the corporate income tax rate will be restricted next year to companies with a turnover of less than 250 million euros.
Budget deficit
France repeatedly failed to keep its budget deficit under 3 per cent until 2017, and the deficit for next year was originally forecast to be 2.8 per cent of GDP.
“We have made mistakes. We haven’t listened enough to the French people,” Philippe also said, speaking of the month-long grassroot “yellow vest” movement that has sparked nation-wide demonstrations, along with traffic blockades and destruction of motorway toll booths.
The Vinci motorway company, which operates some 4,400 kilometres (2,700 miles) of roads, on Monday said damage had cost it “tens of millions of euros”, with at least six buildings torched, 15 toll stations destroyed, and 33 vehicles wrecked. Arson attacks continued overnight with two more motorway toll stations set on fire in southern France, near Beziers and Manosque, officials said.
Pre-Christmas sales have also been badly hit with the National Council of Commercial Centres reporting a drop of two billion euros in shopping, with businesses unlikely to make up the shortfall by December 25.
“We have understood the message sent by the French people: They want us to go faster when it comes to improving purchasing power and they want to be associated to the decision-making process,” Philippe added.
The prime minister specifically said he would consider one of the main demands made by protestors who have called for citizen initiated referendums, on the Swiss model. “I don’t see how we could be against the principle of it. Referenda can be a good tool in a democracy, but not on every issue or under whatever circumstances,” Philippe said.
Referendum
The president of the National Assembly Richard Ferrand said on Sunday he was ready to see the referendum issue debated.
But “rules must be established”, he told France 3 television, for example as regards voter turnout to ensure that “popular expression is not betrayed by minorities”.
And one should make sure that the referendum is “appropriate” to avoid people asking for example that “pensions be tripled” or that “this or that minister be sacked because of a wrong decision”, he added.
The new measures “will be discussed on Thursday by the Assembly and on Friday by the Senate,” Ferrand said while urging members of parliament not to delay these “urgent social measures” by introducing too many amendments. Macron had until now styled himself as a determined pro-business reformer who would not yield to pressure from protests as his predecessors did. - AFP