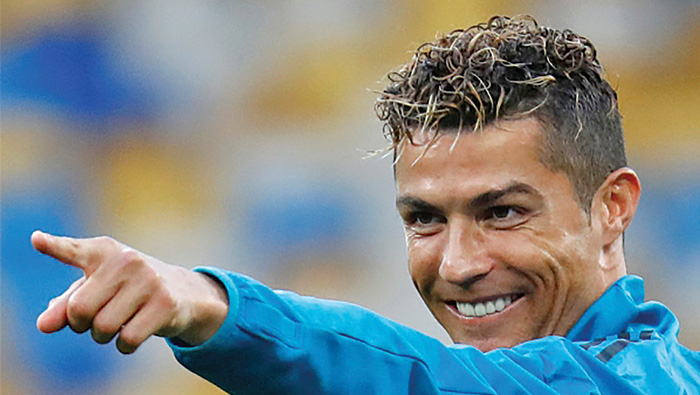 Milan: Cristiano Ronaldo scored from the spot as unbeaten Italian champions Juventus saw off city rivals Torino 1-0 to hammer home their domination in Serie A on Saturday.
Juventus travelled to the Stadio Olimpico after their year-long unbeaten record away from home ended with a shock 2-1 Champions League defeat by Young Boys in Bern.
Ronaldo slotted in his 11th league goal this season, and 5,000th for Juventus in Serie A, after 70 minutes after Torino goalkeeper Salvador Ichazo fouled Mario Mandzukic.
Juventus are now 11 points ahead of second-placed Napoli, who travel to Cagliari on Sunday, with Inter Milan 14 points behind the leaders after captain Mauro Icardi scored from the spot in a 1-0 win over Udinese.
“It was a complicated game, played on a difficult pitch and against a tough opponent,” said Ronaldo.
“We put in a good performance, played better than Torino, had more scoring opportunities and deserved the victory.
“The 5,000th goal? I’m happy, but the important thing was to help the team.”
Torino’s hopes of a rare ‘Derby della Mole’ victory took a knock when goalkeeper Salvatore Sirigu hobbled off with a hip injury after 20 minutes, to be replaced by Ichazo. And the match was decided by a poor backpass from Simone Zaza to Ichazo which resulted in the Torino goalkeeper fouling the onrushing Mandzukic.
Five-time Ballon d’Or winner Ronaldo made no mistake from the spot, despite Ichazo getting his hand to the ball, with the pair locking horns afterwards with the Portuguese striker receiving a yellow card.
“He did well to get a hand to it, but I hit it hard and it went in. That’s the most important thing,” said Ronaldo, who joined Serie A’s top scorer Krzysztof Piatek of Genoa on 11 goals.
Croatian World Cup runner-up Mandzukic thought he had scored a second four minutes later when he had the ball in the back of the net, but was ruled offside. It was the seventh straight league win for unbeaten Juventus since being held by Genoa.
“Today was a great victory to keep Napoli at a distance,” said Juventus coach Massimiliano Allegri. “We played three days after the Champions League a derby against a team that are coming off a strong period of form on a difficult pitch.”
Torino stay sixth, four points off the Champions League berths, after their fourth defeat of the season.
Earlier, Icardi got third-placed Inter Milan back to winning ways with a 1-0 victory over Udinese.
Luciano Spalletti’s side were reeling after their midweek Champions League exit and falling 1-0 to Juventus last weekend in Turin. But Icardi slotted in after 76 minutes at the San Siro with a cheeky ‘Panenka’ into the centre of goal after a penalty was awarded for a Seko Fofano handball.