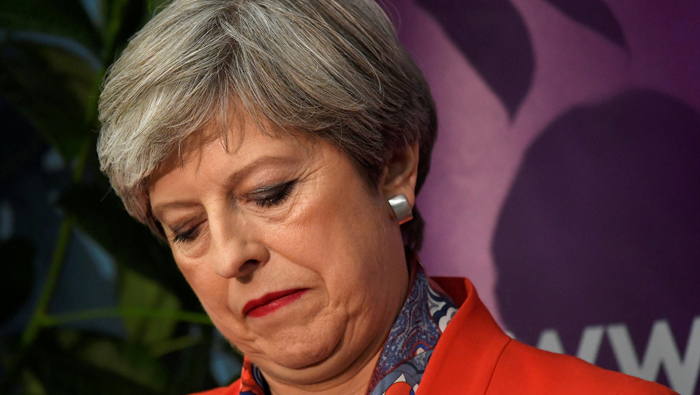 London: The conflict over Europe that has been tearing the Conservatives apart for three decades is as evident on the streets of English towns as it is in the corridors of power.
In Leave-voting Hastings, on the south coast of England, the faultlines of a bitter rivalry between moderates and hardliners within the party extend even to one married couple.
Walking along the town’s main shopping street, Jean Nash, 77, said she was pleased Prime Minister Theresa May had survived a no-confidence vote initiated by hardline Brexiteers in her own party earlier this week.
But her husband Tom, 77, sided with the party’s right wing.
Referendum
Both backed leaving the bloc in the 2016 referendum and are Conservative Party supporters, but now disagree on whether May will really deliver on the vote.
“I’m glad she’s in still because they were all bombarding her... I still think we’re going to get out,” said Jean. Her husband countered: “I don’t think she’s been strong enough with the EU.
“She’s not doing what people want,” he added, as seagulls squawked overhead. “We’re in mid-air all the time; we just don’t know what’s happening.”
Britain’s ruling Conservatives have suffered from infighting over Europe ever since the late 1980s.
The issue effectively ended Margaret Thatcher’s 11-year rule in 1990 and helped condemn her successor John Major to electoral defeat in 1997.
Then prime minister David Cameron in 2013 promised a referendum to try put an end to the squabbling and silence eurosceptics, banking on an easy victory.
But the campaign divided the party, and the country, and the divisions have only grown wider over nearly two years of tortuous negotiations.
“The Conservative Party are like rats in a sack” on the issue of Europe, said Pippa Catterall, professor of history and policy at the University of Westminster.
“They’ve spent so much time and effort thinking about leaving the EU that a kind of policy dimension to it has got lost in the long grass,” she said.
Many Leave-voting Britons now fear their dream could get snagged up in detail.
“I’m fed up with them dragging their heels,” said 59-year-old Caron Hart, who had hoped for May’s defeat. “It’s obvious they’re trying to get out of it (Brexit),” he said.
Conservative voter Bettina Fennell, 79, also wanted the referendum result honoured, but was more sympathetic to the prime minister’s plight.
She called May’s critics “petty two-faced” politicians.
“It was the same with Maggie Thatcher: they don’t like a woman with brains telling them what to do -- especially when she’s right,” she added. Hastings, a town of around 90,000 residents famous for the battle in 1066 that marked the start of the Norman conquest of Britain, is typical of non-metropolitan England.
It leans Conservative and supported — by 55 to 45 per cent — leaving the EU in the 2016 referendum. This was higher than the overall national result of 52-48.
‘Fudged’ EU withdrawal
Michael Edwards, a Conservative councillor and party member for 45 years, said the party has grown accustomed to divisions over Europe and could still unite around its core philosophy of free enterprise and small government.
But asked about May and her Brexit deal, Edwards said he and other rank-and-file members were “livid” she had survived and now feared a “fudged” EU withdrawal.
“MPs have bottled it,” he fumed from a Hastings cafe adorned with photos showcasing the town’s history as a seaside destination.
“Here was a chance to actually change course, to actually restore the direction towards Brexit,” he said.
The town’s parliamentary seat, known formally as Hastings and Rye, is currently represented by Work and Pensions Secretary Amber Rudd.
A May ally who is widely tipped as a possible future leader, Rudd was re-elected last year with a much reduced majority of just 346.
Rudd backed Remain in 2016 and recently said she would do the same if another referendum was held -- a prospect that some see as a way of breaking the impasse in parliament.
The contradictions are a headache for residents of Hastings.
Leave voter Valerie Duffell, 69, a former Conservative Party member, said she was now disillusioned with May and British politics as a whole. “We’re not going to get anywhere with all these different factions,” she said.