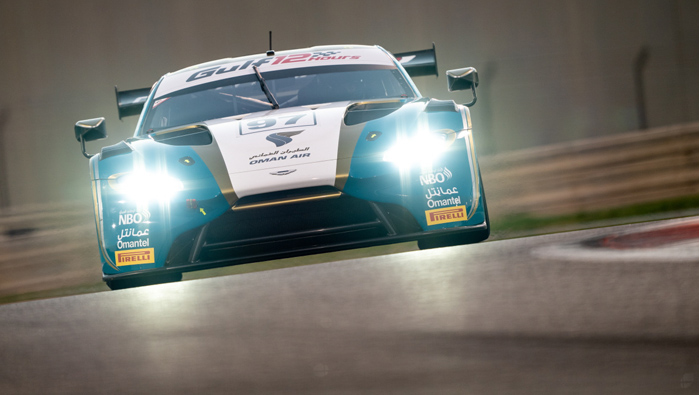 Abu Dhabi: Ahmad Al Harthy and Oman Racing team-mates Jonny Adam and Darren Turner are confident of leading from the front in today’s Gulf 12 Hours at Yas Marina Circuit, after displaying fantastic pace in practice and qualifying over the past couple of days at the Abu Dhabi track.
Regularly in the top four during the various sessions with the brand new Aston Martin Vantage GT3, an unfortunate red flag stoppage fractions before the end of the third and final qualifying session on Friday, prevented Oman Racing from a near-certain start on the first couple of rows.
Even so, from fifth overall on the grid, third in the GT3 Pro class, the No.97 Aston Martin – which is prepared and run by British squad TF Sport – will be one to watch with Muscat racer Al Harthy, Adam and Turner all showing very competitive pace. Notably, the Oman Racing entry was the fastest of the Aston Martin teams.
“Every day since we’ve been with the new car we’ve made good progression, we’re understanding all of the new characteristics and I’m really happy with how we’re moving forward”, said a buoyant Al Harthy, adding,“I was very happy with my qualifying run in session one, Darren [Turner] had a great lap too in his session and Jonny [Adam] was on a quick lap at the end, but the session was red flagged. “We couldn’t fully maximise our starting position as a result, but fifth overall and third in GT3 is still very good and we have a long race ahead which we’re all really looking forward to. We know what we have to do, we know the new Aston Martin is very quick and we’re all feeling very confident.”
He added: “This Aston is a completely different car to the one we’ve run for the past few seasons in terms of the characteristics. It’s very responsive to the changes we’ve been making with set-up and the aero package is way more advanced than the previous car, which really makes the driving an even more pleasurable experience.” In official ‘night’ testing on Thursday, Oman Racing was the quickest of the Aston Martin teams with the ninth fastest time overall.
Free practice on Friday ran across three sessions and in the opener Oman Racing was an improved fourth overall, fourth again in session two and then an excellent second quickest in session three, less than 0.2 seconds shy of the top of the times.
Heading into the trio of qualifying sessions with a great chance of challenging for a starting slot on the first couple of rows of the grid, Al Harthy took session one and the Oman Ministry of Sports Affairs, Oman Air, National Bank of Oman, Omantel, Barr Al Jissah and Amouage-supported racer posted the fourth quickest time, second in the GT3 Pro class, with a lap of 2m09.959 seconds.
In the second run, Turner took over driving duties and he produced a time of 2m09.080 seconds to secure fifth overall and third in class. Adam got behind the wheel for session three and was on a very quick effort right at the end, but the red flags meant he wasn’t able to complete his lap and finished up with a time of 2m09.744 seconds. The average from all three resulted in a still strong fifth overall.
Today’s eighth staging of the hugely popular Gulf 12 Hours will get underway at 09.30 (local time) with the first six hours of action. The second half of the encounter will begin at 17.30 (local time).