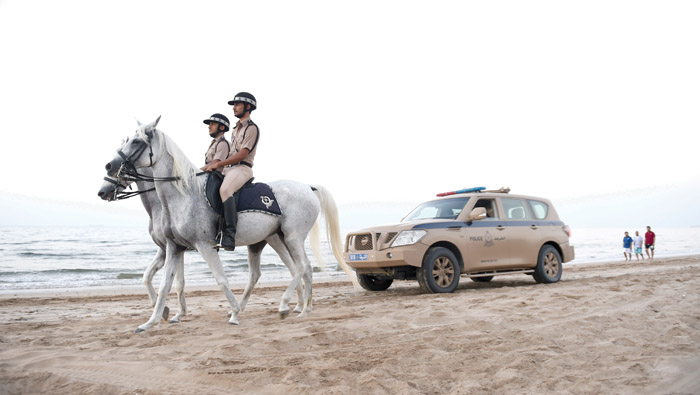 Muscat: The Royal Oman Police has thanked residents and citizens alike for their invaluable help in not just making, but maintaining Oman as one of the safest countries in the world.
According to the 2018 Global Competitiveness Report released by the World Economic Forum, the Royal Oman Police (ROP) was ranked first in the Arab world, and fifth worldwide, in terms of the reliability of police services.
As the Sultanate continues to pursue the policies of peace, tolerance and understanding, which form the cornerstone of the Omani government and the principles of His Majesty Sultan Qaboos bin Said, Oman’s national police force has reached out to all of local residents and expats in the country, and has asked them to continue their good work in making the country conducive for all to live in. Commenting on this, a top official at the ROP told Times of Oman, “We would like to thank everyone for helping us make Oman one of the safest places in the world. ROP, along with other security authorities, are working around the clock to provide security for all. The 2018 Global Competitiveness Report relied on many factors to rank ROP first in the reliability of its police services.
“It’s our duty to achieve the highest level of security and safety for all in this dear homeland, as well as harness the human and material resources to build a modern police force with strategic and practical planning to keep abreast of the developments, changes and security phenomena that are taking place in our modern world,” he added.
The prestigious global ranking for the ROP comes in the wake of several awards received by regional and international bodies, as being one of the most advanced e-governmental institutions in the Sultanate. ROP officials said that the report, “reflects the absence of terrorist attacks, thanks to the political and stable security that (Oman) enjoys”.
“This, in turn, was reflected in the Sultanate’s result in the cost of organised crime on business. It is worth mentioning that the Global Competitiveness Report is about measuring factors that contribute to the acceleration of production and prosperity for 140 countries around the world, relying on 12 core categories that are the pillars of the Competitiveness Index,” added the police statement.
Residents in the country were not surprised that Oman was ranked so high.
“This is one of the safest countries in the world,” said Rajkumar Iqbal Ahmed, CEO of Al Khalij Heavy Equipment and Engineering. “Wherever you go in this country, even if it is late at night, you know the place is safe for both women and children. Oman is also strategically situated, and people here are really willing to work, so I am not surprised that this place is called the Switzerland of the GCC. It is a really good place for families to live, and for you to bring up your children.”
Ratheesh Kalembath, Convener of the Indian Social Club’s Kerala Wing, added, “I have been living here since 1992, and my family joined me in 1995, and I can say that since then, they have had no problems. I have a lot of friends who live across Oman, and they have never had the need to complain about safety issues. This is a place where you can walk on the road safely at night, and I would say it is number one in the world for safety.”
Oman’s position in the world competitiveness ranking in the World Economic Forum report jumped from 62nd to 47th out of 140 countries between 2017 and 2018, which came from a score increase of 3.4 from 61 to 64.4 in index aggregates.
Oman ranked first in the lack of terrorism incidences, fourth in the lack of organised crime, fifth in social capital and reliability in police services, seventh in the future orientation of the government, eighth in the quality of roads, ninth in the effect of subsidies and taxes on businesses, and Oman enjoyed a high ranking when it came to inflation.