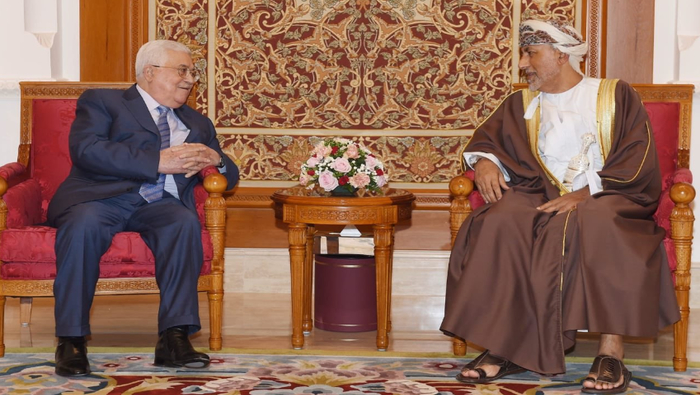 Muscat: President Mahmoud Abbas of the State of Palestine, Chairman of the Executive Committee of the Palestine Liberation Organisation, arrived here yesterday on a three-day visit to the Sultanate during which he will meet with His Majesty Sultan Qaboos bin Said.
He was received upon his arrival by His Highness Sayyid Shihab bin Tariq Al Said, Yousuf bin Alawi bin Abdullah, Minister Responsible for Foreign Affairs, Dr. Tayseer Ali Farhat, Ambassador of the State of Palestine appointed to the Sultanate and members of the Embassy.
During the visit, the Palestinian President is accompanied by Jibril Rajoub, Secretary of Fatah Central Committee, Hussein Al Sheikh, Minister of Civil Affairs, Maj.Gen Majed Faraj, Head of the General Intelligence Service, the Palestinian Ambassador appointed to the Sultanate and a number of officials.
This visit comes within the framework of the good fraternal relations binding the two sides and the keenness to enhance and promote them to serve interests of the Omani and Palestinian people.