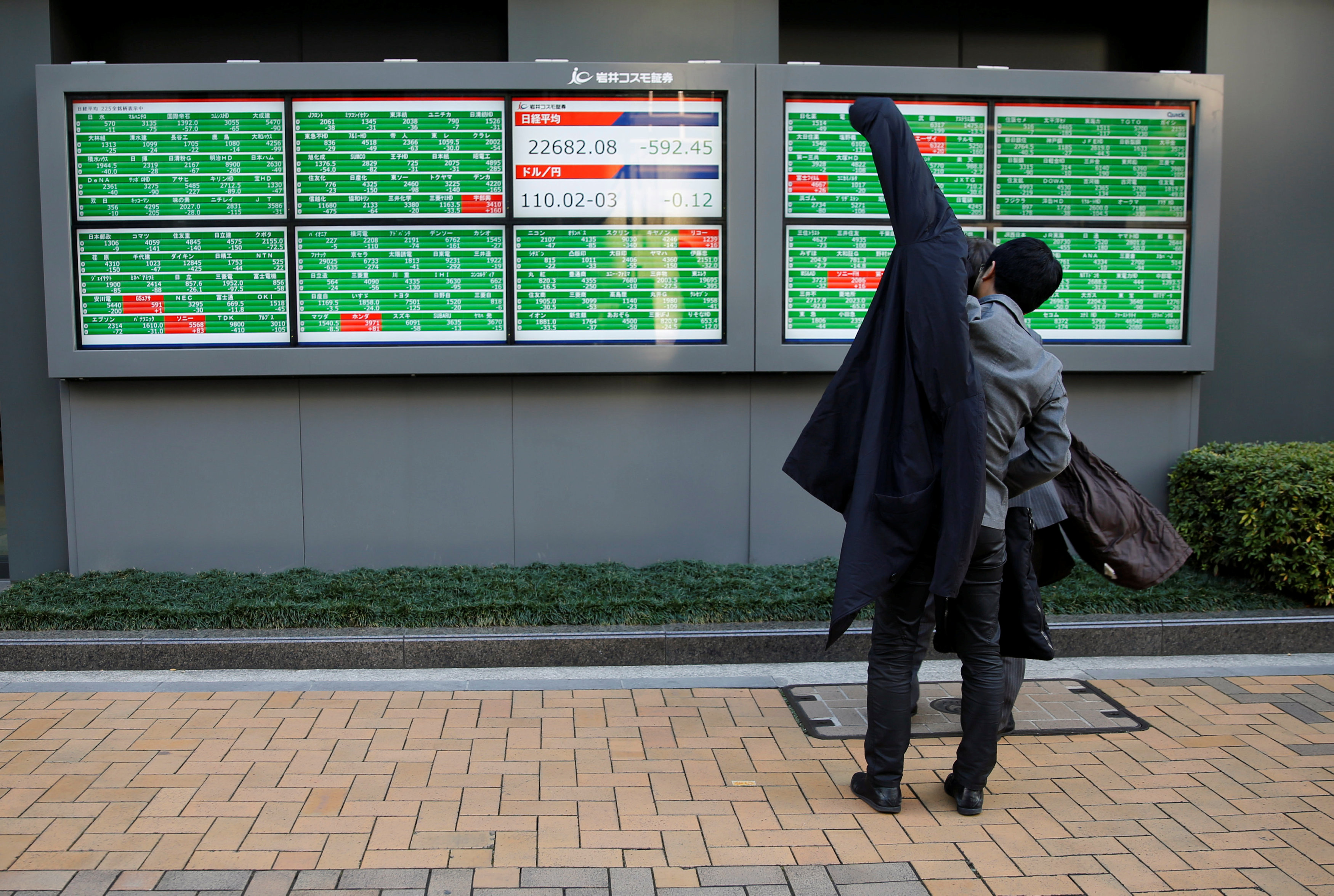 Tokyo: Asian stocks rose modestly on Tuesday, gaining a firmer footing after a week of heavy losses, although cooling factory-gate inflation in China and increasing tensions between Saudi Arabia and the West have capped gains.
Spread-betters expected European stocks to open slightly higher, with Britain's FTSE edging up 0.05 per cent, Germany's DAX adding 0.25 per cent and France's CAC tacking on 0.15 per cent. MSCI's broadest index of Asia-Pacific shares outside Japan nudged up 0.25 per cent, crawling away from a 19-month trough touched on Thursday.
Japan's Nikkei bounced 0.8 per cent following a decline of nearly 2 per cent the previous day.
The disappearance in Turkey earlier this month of a Saudi journalist critical of Riyadh has provoked an international outcry against the oil-rich kingdom, which has rattled its financial markets.
US President Donald Trump has sent Secretary of State Mike Pompeo to Saudi Arabia as the case threatened to strain the relationship between the strategic allies.
"The focus of the markets has turned to the Middle East due to the Saudi incident. And with US stocks still struggling, other equity markets will have a difficult time bouncing convincingly," said Masahiro Ichikawa, senior strategist at Sumitomo Mitsui Asset Management in Tokyo.
"The United States has been the epicentre of the recent market tumult, with Wall Street shares being hit by higher Treasury yields. US shares will have to find their feet first."
Saudi Arabia's riyal currency retreated overnight to 3.7525 to the dollar, its weakest in two years, before edging back to 3.7513.
Wall Street shares were dragged down on Monday by a retreat in technology shares amid lingering worries over high US bond yields.
The Dow has lost 4.5 per cent this month, pulled away from record peaks, as long-term Treasury yields soared to their highest level since 2011. Higher yields are seen eroding the allure of equities.
Hong Kong's Hang Seng was up 0.1 per cent and the Shanghai Composite Index added 0.15 per cent.
Data on Tuesday showed China's factory-gate inflation cooled for a third straight month in September amid ebbing domestic demand, pointing to more pressure on the world's second biggest economy as it remains locked in an intensifying trade war with the United States.
Amid the tentative ebb in risk aversion in the broader markets, perceived safe havens such as the Japanese yen and Swiss franc handed back some of their recent gains.
The dollar was up 0.3 per cent at 112.10 yen following a slip to a one-month low of 111.625 overnight.
Against the dollar, the Swiss currency weakened 0.2 per cent to 0.9886 franc after advancing 0.5 per cent the previous day.
The euro was a shade weaker at $1.1569 after rising 0.2 per cent the previous day.
Sterling was at $1.3142, having bounced from a one-week low of $1.3080 plumbed on Monday amid a stalemate over the post-Brexit status of Britain's land border with Ireland.
Currency market focus was on the US Treasury's semiannual currency report due later in the day, with investors waiting to see Washington's view on China after media reports last week that the department has not labelled Beijing a currency manipulator.
"It is clear that China does not meet the criteria of currency manipulator based on the current assessment, as the country's current account surplus as a percent of GDP has fallen below 3 per cent," wrote strategists at OCBC Bank.
China's yuan was a touch lower at 6.925 per dollar in onshore trading.
In commodities, tension between the United States, the world's top oil consumer, and Saudi Arabia, one of the biggest producers, pushed up crude prices on concerns about supply.
Signs that Iranian oil exports have fallen ahead of US sanctions taking effect in November have also lifted crude.
Brent crude futures rose 0.45 per cent to $81.13 a barrel, stretching gains from Monday.