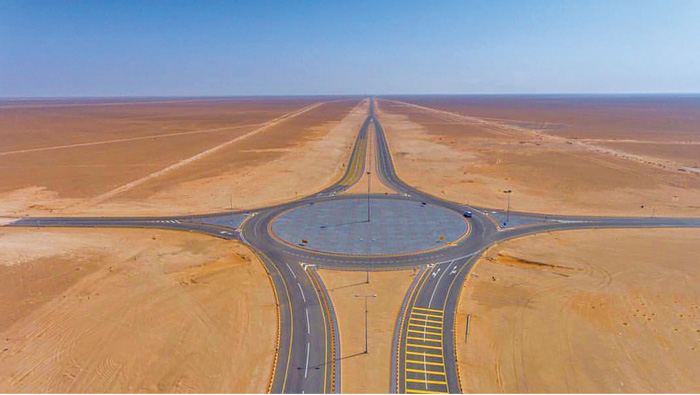 Muscat: A road, which will link Oman and Saudi, will be completed by the end of this year, according to the Saudi ambassador in Oman.
The ambassador attributed the delay in the opening of the road to the very tough geographical areas in the Empty Quarter it passes through.
Eid Al Thaqafi, the Saudi ambassador, said, “It’s about to be completed. There were some delays in road works. From the Omani side, the road work has been completed as the distance is shorter compared to the Saudi Arabian side. For the Saudi side, the road passes through a very tough geographical area, which is the Empty Quarter. According to the Saudi Transport Ministry, the road will be opened to the public soon.”
More than 130 million cubic metres of sand were removed as Oman gears up to open the 680km-road to Saudi Arabia.
The quickest route between Oman and Saudi Arabia is currently 1,638 kilometres long, passing through the UAE and taking between 16 and 18 hours. The new road is expected to save more than 800km of the journey.
Statistics in 2015 indicated that the annual volume of goods (imports and exports) traded across the Saudi-Omani border was 2.1 million tonnes. “It is estimated that the new road will contribute to the good growth of trade activities between the two countries,” the ambassador said.
With regard to the progress made in opening this road, the Implementation Support and Follow-Up Unit (ISFU) of Tanfeedh said that several attempts have been made by various stakeholders to open the highway, however, they haven’t come to fruition, leading to a delay in opening the road.
Empty Quarter
In Oman, the road begins from the area of Tanam in Ibri, continuing through the oilfields until it reaches the Empty Quarter, where the Oman-Saudi border is located.
The project has been called an “engineering marvel”, having been built through the sands of the Empty Quarter, which is the largest contiguous sand desert in the world. The existing 52-km one-way road from Hafeet to Wadi Saa will be transformed into a dual carriageway.
Moreover, the design of the 45-km overpass road in Ibri has been completed and no-objection letters from competent authorities have been obtained.
“The Ministry of Transport and Communications completed the road design tender and awarded the tender to the consultant,” ISFU said.
“The opening of the road connecting the Sultanate to Saudi Arabia will contribute to the enhancement of social ties and economic activities between the two countries. It will also facilitate the flow of commercial and investment activities between the two countries and strengthen the Sultanate’s position as a regional trading centre,” the report said.
“Such roads are essential for the development of local trade, as they link villages to ports, in addition to linking the GCC countries. Another important objective of this project is to provide direct contact between the two countries. There is currently no direct link between the Kingdom of Saudi Arabia and the Sultanate,” ISFU said.
“This project clearly shows nothing is impossible,” said long-time local resident Mohammed. “The Empty Quarter has stood for centuries between Oman and Saudi Arabia, and with this road project, the first-ever land link will be a reality between the two neighbouring countries.”