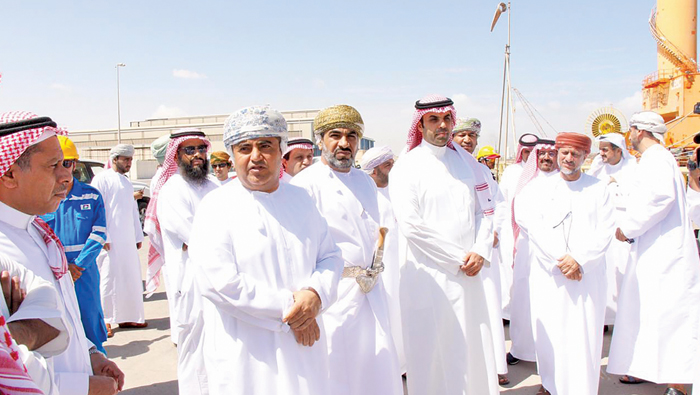 Duqm: The Saudi trade delegation headed by Ibrahim bin Abdurrahman Al Omar, Governor of the General Investment Authority in Saudi Arabia participating in the “Omani-Saudi Economic Forum” yesterday visited the Economic Zone of Duqm.
The Saudi delegation was received by Dr. Ahmed bin Mohammed Al Futaisi, Minister of Transport and Communications and a number of officials of the Special Economic Zone Authority in Duqm(SEZAD), Dry Dock and Oman Oil Company.
During the visit, they discussed the prospects of economic cooperation between the two countries and reviewed the investment opportunities available in the port sector, the dry dock and the logistics sector in the Sultanate.
Presentations were given for the visiting delegation about the economic zone of A’Duqm which highlighted the projects being implemented in the Zone.
Ibrahim bin Abdurrahman Al Omar praised SEZAD’s efforts in developing the Zone for the best and making it an engine to diversify the Omani economy and what the zone is witnessing of growth, development and prosperity in the public services and facilities.
He expressed his admiration for the projects being hosted by the Zone and the growth of large service businesses and the advantages available to investors and businessmen.
The Saudi delegation expressed its desire to invest in the petrochemical sector through studying the investment opportunities available in this sector.
The delegation said that it was agreed to hold a meeting with officials of the State General Reserve Fund to study all investment opportunities in Duqm.
During his meeting with the delegation, Lee Kian CEO of SEZAD said that the Authority provides many facilities for investors and businessmen, including facilitating the registration of projects, granting permits and licenses and providing many incentives to encourage investment, adding that SEZAD contains various investment opportunities that provide many options for companies wishing to diversify their investments.
He called upon Saudi companies to make use of the benefits and incentives offered by SEZAD for projects in the Zone.
The visit was part of the “Omani-Saudi Economic Forum” organized by the State General Reserve Fund to discuss the investment prospects in the Sultanate and increase trade cooperation between the Sultanate and the Kingdom of Saudi Arabia.