Clean up drive begins in Dhofar after Luban 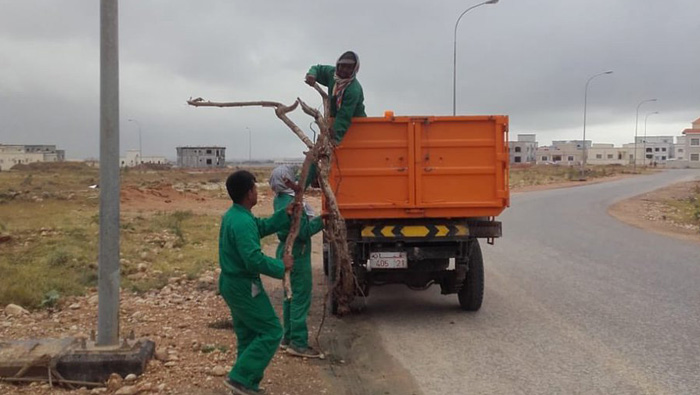 Muscat: As tropical storm Luban weakened in Dhofar, authorities, volunteers and local residents have begun to clear the roads.
The Public Authority for Civil Aviation announced that tropical system Luban had finished its lashing the area as of Sunday night.
Since then, civil defence officials, the Royal Oman Police, and volunteers have been working to repair damaged areas.
Also, Dhofar Municipality has begun clearing the city of debris left behind by Luban. “Among the efforts of the basic services sector, the Rural Areas Electricity Company managed to restore electricity to all areas affected by tropical storm Luban,” according to officials at the National Emergency Management Centre.
“However, work is still underway to restore electricity in the Diam area in Wilayat Dhalkout, as the road that leads to the area has been affected,” NEMC said.
Citizens and municipalities also worked together to clear debris from Shuwaymiyah/ Hasak road. Dhalkout municipality also reopened Hafoof road.
Despite the roads, Sultan Qaboos hospital reopened on Monday and resumed work, as all patients were transferred back to the hospital from the Armed Forces hospital.
Despite the end of the effect of Luban, authorities have advised the public to remain careful and avoid crossing wadis.
Of note, the Public Authority for Civil Defence and Ambulance has announced that a person was found dead, after drowning in a wadi in Dhofar.
Regarding the death, PACDA said, “The search and rescue team from the civil defence and ambulance authority in Dhofar responded to a report of a person who was swept away in a wadi in Wilayat Mazyounah.” “The person was found dead,” PACDA added.
Read here: One person drowns while driving through wadi in Oman
Wilayat Dhalkut recorded the highest amount of rainfall in Dhofar, with 263mm of rain, according to Ministry of Regional Municipalities and Water Resources monitoring stations. A total of 609 mm of rainfall has been recorded in Dhofar.
Rakhyut record 119 mm of rainfall, followed by Salalah with 48.4 mm, Shalim with 34mm, Sadah and Mirbat with 29 mm, Al Jazir with 13.2 mm, and Thumrait with 18 mm of rainfall. Haima and Taqah recorded 13 mm and 9 mm. Al Mazyounah recorded the least amount of rainfall, with 7 mm of rain.
Oman Charitable Organisation donated eight trucks carrying essentials, such as blankets, pillows and mattresses, to Dhofar and Al Wusta.
There were 71 designated shelters in Dhofar and three in Al Wusta, said Hamood Al Mandhari, Coordinator for Relief and Shelter at the National Centre for Emergency Management, adding that 61 shelters are working and ready to use in Dhofar, and 10 are on standby.
“As a start, we sent 25 tonnes of relief items to Rakyout, 8 tonnes to Salalah and another 8 tonnes to Sadah,” added Al Mandhari
“We coordinated with the Oman Charitable Organisation and assigned trucks to carry relief items to Rakyout Dhalkout, Sadah and, Salalah. We will increase the amount based on weather developments,” Al Mandhari added.