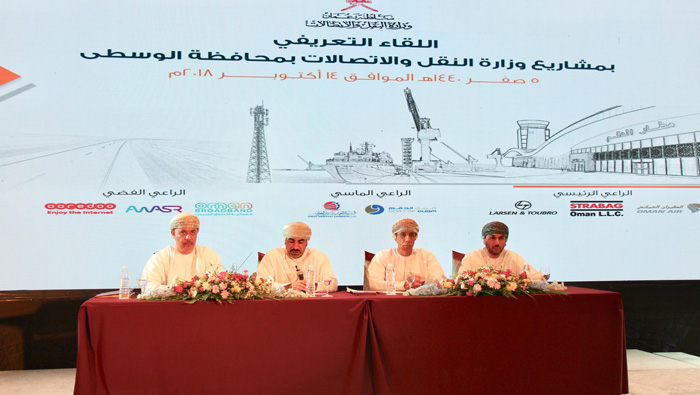 Duqm: The Ministry of Transport and Communications organised a meeting in the Wilayat of Duqm yesterday during which a review was made on the ministry's major projects in the field of transport, communications and maritime affairs.
Dr. Ahmed bin Mohammed Al Futaisi, Minister of Transport and Communications, said that the meeting aims at reviewing the major current and future projects, carried out by the Ministry in the Governorate of Al Wusta, in addition to listening to proposals and opinions of citizens in relation to projects that fulfill the public aspirations for their implementation, and promote partnership among all state and community institutions.
He pointed out that the meeting comes as a complement to the meetings held previously by the Ministry in several governorates of the Sultanate.
He explained that the meeting witnessed a great interaction and a good presentation by the audience.
He pointed out that Mahout – Duqm road is one of the priorities of the Ministry of Transport and Communications and there is coordination with the Special Economic Zone Authority in Duqm (SEZAD) to complete this important road.
He added that work is underway to complete the Adam-Haima road, which is expected to be completed before the end of 2019, as the completion rate is 75 percent.
He said that as for the part related to Haima-Thumrait road, designs and studies related to the road have been completed and will be submitted to the competent parties.
Said bin Hamdoon al-Harthy, Undersecretary of the Ministry of Transport and Communications for Ports and Maritime Affairs reviewed what has been completed in the Oman Maritime Law.
He added that the draft of the new law has been completed and observations of relevant parties have been taken. He explained that the legal review was made at the Ministry of Legal Affairs.
He said that some articles of the law related to regulation of navigation in the territorial waters of the Sultanate have been incorporated into the new draft of the maritime law. He pointed out that the draft law is currently in Ministry of Legal Affairs for submission to the competent legislative bodies.
Many discussions and proposals for the development of the road sector, port services, telecommunications and promotion of flights from Muscat International Airport to Duqm Airport and reduction of prices were raised during the meeting.
In response to a question about increasing the flights number of Oman Air to Duqm and reduction of prices, Dr. Al Futaisi explained that number of Omani flights to Duqm Airport stands at 6 weekly flights.
If there is a request to increase the number of flights, the Public Authority of Civil Aviation (PACA) will be addressed to discuss the possibility of increasing flights.
As for the fares, Dr. Al-Futaisi said that the current prices are subsidised and we see them affordable and reasonable, but there is no harm in studying them, in cooperation with the SEZAD.
Citizens requested the construction of bridge to connect Masairah Island. Dr. Al Futaisi said that the project and the location of the bridge have been studied by the ministry.
He added that the study concluded that the project will cost half a billion riyals.
He added that the study by the specialised consultant found that there is no economic feasibility of the project. He affirmed that the ministry will submit the study of the said project to the Supreme Council for Planning (SCP).