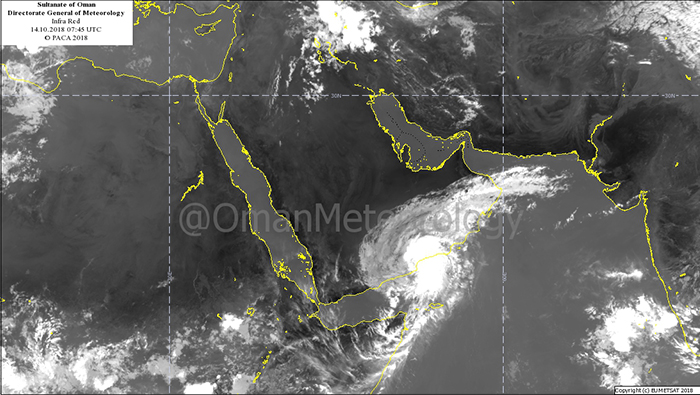 Muscat: Luban has been downgraded from a storm to a deep depression, but its effects will continue to be felt for the next 24 hours the Public Authority for Civil Aviation announced.
According to the latest storm update, the centre of the storm has passed through the coast of Yemen. As a result, it continues to effect Dhofar today Sunday, October 14 with heavy rains and occasional thundershower which may lead to floods, with fresh winds of 20-25 knots. The sea will continue to be rough with a maximum wave height of 3-5 metres.
Due to predicted heavy rains accompanied by high winds and wadis overflowing in Dhofar, citizens and residents have been warned against crossing wadis and have been asked to avoid low lying areas.
Data also revealed that isolated rain is likely to continue in Dhofar until tomorrow, Monday, October 15, 2018.