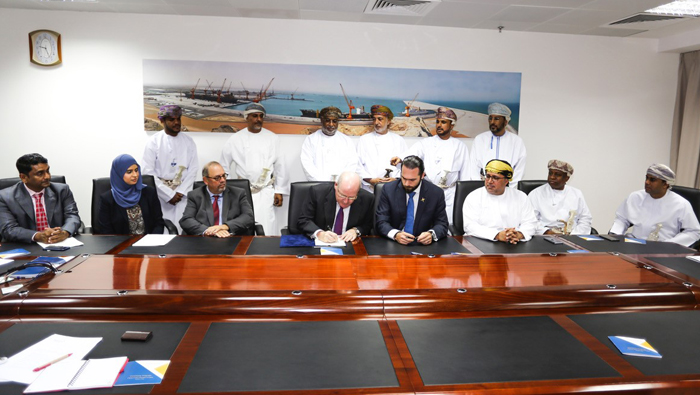 Muscat: An agreement was signed to set up a Tawasul Charitable Organisation in the Special Economic Zone Authority in Duqm (Sezad). Tawasul aims to provide financial support and fund projects for the benefit of local communities in the Special Economic Zone in Duqm (SEZD) in particular and the Al Wusta Governorate.
It also aims to promote sustainable economic and social development according to the areas of work defined in its Articles of Association. These include entrepreneurship, training, education for work, health, environment, and supporting associations and sports clubs.
The agreement of "Tawasul Charitable Organisation” was signed by officials of eight companies: Duqm Refinery and Petrochemical Industries Company, Oman Development Company for the Economic Zone of Duqm, (Tatweer), Oman Petroleum Development Company, Port of Duqm Company, Oman Dry Dock Company, Oman Airports, Sebacic Oman Company, and Nahdat Al Duqm Holding Group.
The agreement was signed in the presence of Sheikh Mohammed Bin Saeed Al Kalbani, Minister of Social Development, and Yahya bin Saeed Al Jabri, Chairman of Sezad.
Al Kalbani said that the establishment of Tawasul is a qualitative step that enhances cooperation between the local community in Duqm and the companies operating in the zone, and expects the organisation to have positive results for companies and the society in the near future.
He said that the establishment of Tawasul is a pioneering idea by the companies operating in the zone and is a product of continuous efforts by companies to serve the community and revitalise the economic sector with precision and provide various services in the areas of community support, training and marketing of products.
The establishment of the organisation is part of the attention accorded by SEZAD and the companies operating in SEZD to promote the concept and practices of corporate social responsibility (CSR) in SEZD.
Al Jabri expressed his thanks and appreciation to the companies that are a part of Tawasul. He said that the new organisation would contribute to increasing awareness of social values and unifying the efforts of community support instead of individual contributions.
The companies elected Dr Rashid bin Ali Al Balushi, Board Member of Tatweer, to be the Chairman of the Board of Directors of the fund. Nasehah Bint Mohammed Al Falahia, General Manager of Duqm Refinery Company, was also elected as Deputy Chairman of the Board.
Foundation objectives
The objectives of the Foundation include providing charitable and public benefits as stipulated in the areas of work specified in its Articles of Association, paying attention to raising the standard of living of the families of social security and low-income families in SEZD, spreading and establishing the social responsibility concept among businesses in Al-Wusta Governorate. It also aims to raise the level of how businesses in SEZD deal with the social responsibility concept, promote and support individual initiatives in social responsibility to consolidate them in the local community by honouring leaders from different sectors, and urging businesses in SEZD to develop their management strategy to reach international quality standards in the area of social responsibility.
It will also support businesses in SEZD and motivate them to obtain international quality certification in the field of social responsibility, as well as support environmental initiatives and increase environmental awareness.
Executive management
The Board of Directors comprises the executive heads of the founding companies or their representatives. The board appoints the CEO of the Foundation to manage its affairs and is accountable to the Board of Directors. The Board of Directors appoints members of the Audit Committee at the first meeting of the Foundation for two years. However, the Board of Directors is not obliged to accept any of the names proposed by the Executive Management of the Foundation. The Foundation's Articles of Association stipulate the selection of the Board of Trustees from the members of the government representatives, including two Walis, two members of the Shura Council, three members of the society and the CEO of the Foundation.
The executive management headed by the CEO shall manage all executive responsibilities of the Foundation in accordance with the executive regulations and powers vested in the CEO by the founding companies.
Foundation funds
The financial assets of the Foundation shall consist of the income of the Foundation and the contributions of its founding companies. The financial year of the Foundation shall commence on January 1 and end on December 31 of each year except for the first fiscal year beginning from the date of registration and expiring on December 31 of the same year. The Foundation shall deposit its funds in bank accounts bearing the name of the Foundation in an Omani bank and notify the Ministry of Social Development of the name of the bank and account number.
The Foundation's Articles of Association stipulate that the Board of Directors shall determine the ways in which the funds of the Foundation shall be used to achieve its objectives, including savings, to be used as a reserve fund for future expenditures. Payment must be made through the bank accounts of the Foundation in accordance with the internal rules in force in the Foundation approved by the Board of Directors, which determines the identity of those authorised to pay and sign on behalf of the Foundation.