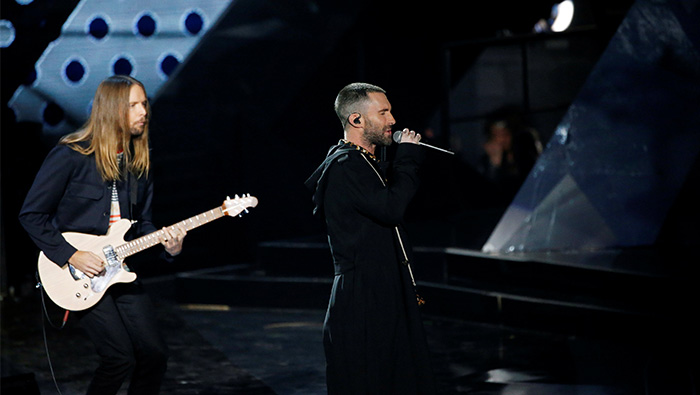 Atlanta: Thirteen years after Mick Jagger and the Rolling Stones played during the Super Bowl halftime, Maroon 5 will display the "Moves Like Jagger" at Super Bowl LIII.
Maroon 5 will be the headline performer at the break in Atlanta on February 3, multiple media outlets reported Wednesday.
According to the Hollywood Reporter, Maroon 5 front man Adam Levine told Howard Stern in 2015, "We very actively want to play the Super Bowl."
The Reporter also noted that Cardi B and Travis Scott potentially could make guest appearances at the Mercedes-Benz Stadium. Cardi B was featured on Maroon 5's recent hit, "Girls Like You".
The NFL issued a statement regarding reports of the Super Bowl entertainment being set: "It's a Super Bowl tradition to speculate about the performers for the Pepsi Halftime Show. We are continuing to work with (sponsor) Pepsi on our plans but do not have any announcements to make on what will be another epic show."
Last year's Super Bowl halftime show featured Justin Timberlake in his return after he was part of Janet Jackson's notorious "wardrobe malfunction" during the 2004 NFL title game.
The list of past Super Bowl halftime performers includes Bruno Mars, Beyonce, Madonna, Lady Gaga, The Who, Bruce Springsteen and the E Street Band, Prince, Paul McCartney, U2, Diana Ross and Michael Jackson.