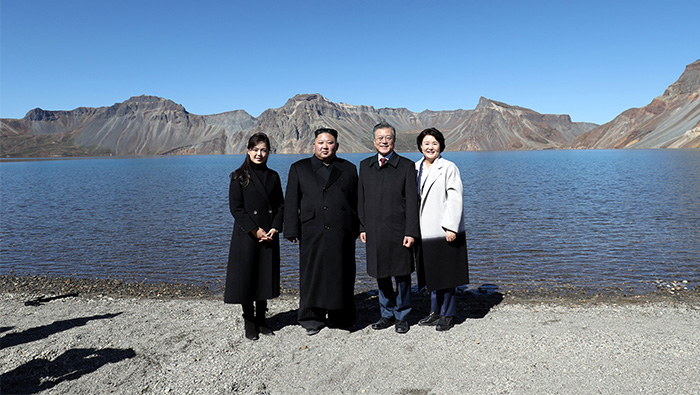 Seoul: South Korean President Moon Jae-in cleared a top item off his bucket list on Thursday: Climbing Mount Paektu in North Korea with its leader Kim Jong Un.
After the two leaders pledged new steps aimed at salvaging nuclear talks on Wednesday, Moon and Kim decided to use the final day of their three-day summit to go up the symbolic mountain on the Chinese border together.
Moon is known for his love of mountain climbing and has trekked in the Himalayas at least twice.
The president has long stated that visiting Mount Paektu, which can also be spelled Baekdu in the South and is known as Changbai in China, was a "long unfulfilled dream".
"Many people in the South would go to Mount Paektu from the China side, but I decided not to, pledging myself that I would go stepping on our soil," Moon told Kim after reaching the peak of the mountain.
"But time flew so fast, and I thought my wish may not come true, but it did today."
As Moon arrived at an airport near the mountain, some 1,000 North Koreans greeted him, waving flowers and chanting "Motherland! Unification!"
Moon and Kim took a cable car together to Heaven Lake, a caldera at the top of the mountain, and walked around the area with their wives and officials from both sides.
Pictures showed Moon and Kim smiling and posing with their wives, and Moon filling a bottle with water from the lake.
"The Chinese envy us because they can't go down to the lake from their side but we can," Kim said.
"We should write another chapter of history between the North and the South by reflecting our new history on this Heaven Lake."
Some senior South Korean officials accompanying Moon suggested inviting Kim and his wife to Mount Halla, the highest mountain and a scenic tourist resort in the South.
"There is our old saying that we greet the sun at Paektu, and greet the unification at Halla," Kim's wife, Ri Sol Ju, said.
Kim said on Wednesday he will visit Seoul in the near future, in what would be the first trip to the southern capital by a North Korean leader.
'Sacred mountain of revolution'
As the highest peak on the Korean peninsula at about 2,750 metres (9,000 ft), Mount Paektu is the mythical origin of the Korean people, featured in South Korea's national anthem and various North Korean propaganda.
An active volcano, the mountain is dotted with secret camps and historical sites from Korea's guerrilla war against the occupying Japanese in the 1930-40s, in which Kim's grandfather, Kim Il Sung, played a leading role.
North Korea says Kim's grandfather and father, Kim Jong Il, were born at Mount Paektu, a centrepiece of the North's idolisation and propaganda campaign to highlight the sacred bloodline of the ruling Kim family.
A copy of an article of the North's official newspaper Rodong Sinmun dated December 26, 1980 calls Mount Paektu a "sacred mountain of revolution" spearheaded by Kim Il Sung "in the flames of the arduous 20-year anti-Japan struggle."
"State media and ideological indoctrination was setting the stage" for Kim Jong Il's power succession that took place in 1980, said Michael Madden, a North Korea leadership expert at the Stimson Centre's 38 North in Washington.
Kim Jong Un, too, has visited the mountain around major developments in North Korea, such as before he executed top officials including his uncle Jang Song-thaek in late 2013, and following North Korea's fifth nuclear test in 2016.
He last went there in December, after declaring North Korea had completed its goal of becoming a nuclear state, according to state media.
"(Moon) would add much legitimacy to Kim, who had never had any summit with a foreign leader until early this year," said Seo Yu-suk, a research manager at the Institute of North Korean Studies in Seoul. "It's a diplomatic coup for him."
Moon's parents fled the North during the 1950-53 Korean War, shortly before Moon was born in South Korea in 1953.