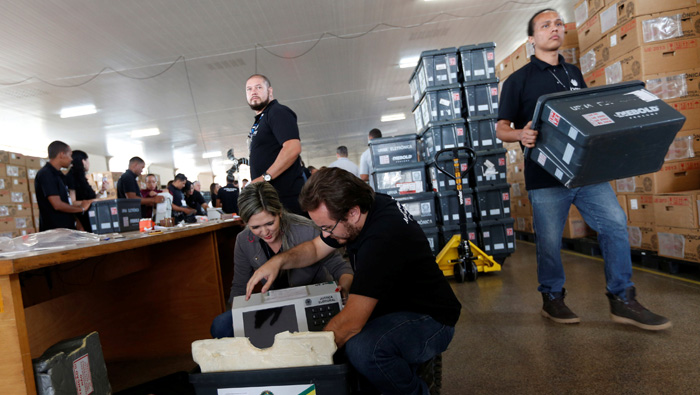 Sao Paulo( Brasilia): Brazil's presidential campaign, already the most divisive since the end of military rule three decades ago, has become even more polarized, raising concerns about the future of the country's democracy.
Less than three weeks before the vote, polling shows that the middle has collapsed, with the electorate heading to either a left or right extreme. On the right is poll-leading Jair Bolsonaro, a retired Army captain, who has emerged from a September 6 assassination attempt more radical than ever.
He said in a Facebook video viewed 7 million times by Wednesday morning that if he loses the election, it would be because the leftist Workers Party (PT) rigged the voting system.
That jolted an already tense political landscape. On the other side, the PT has called the election a fraud because its jailed founder and Brazil's most popular politician, Luiz Inacio Lula da Silva, has not been allowed to run due to a corruption conviction.
The party has made "Free Lula" its rallying cry. The PT's stance has stoked concerns among a wide swath of voters, who blame the party for widespread political corruption and fear that if the PT's candidate, Fernando Haddad, wins he would pardon Lula.
Haddad on Tuesday flatly denied he would do that, though he said the former president would be an essential adviser to his government, even from jail. Lost in the increasingly toxic atmosphere ahead of the October 7 first-round vote is any chance Brazil's election will unite a deeply split country. That raises the risk that the next government will be paralyzed by infighting and opposition, unable to make headway against the dual economic and political crises facing Brazil, the world's eighth-largest economy.
"Many thought that by the time we got close to the election, some middle ground would be found, and that is not what we are seeing," said Monica de Bolle, director of Latin American studies program at Johns Hopkins School of Advanced International Studies.
Instead, Bolsonaro, 63, is heading to a likely October 28 runoff vote against Haddad, 55, a matchup that polls show is deadlocked. The election has become "very dangerous," de Bolle said.
That is mainly because Bolsonaro, who has repeatedly praised Brazil's military regime, and his running mate, Hamilton Mourão, a retired Army general, have openly talked "about constraining civil liberties and rewriting the Constitution in a authoritarian way," de Bolle said.
Mourão has said the armed forces should carry out a coup if the country's judiciary cannot end political corruption. "They are not shying away from saying these things openly and they are not being criticized for saying them," she added.
Amid rising crime and continued revelations of corruption, the Bolsonaro ticket offers a simple formula for voters, while enticing powerful business sectors with promises of liberal economic policies and, above all, stopping the return of Lula's party and its state-led plans for the economy.
"What I find really surprising is that there is a large segment of the Brazilian population, the elite, the people who should know better, who are basically throwing risk aside and saying 'you know, I don't care. I just don't want the PT back in power,'" de Bolle said.
That is seen in the open arms that influential Brazilian economic groups are offering to Bolsonaro's team. On Monday, Mourão, who last week said Brazil's 1988 Constitution could be re-written without direct input from voters, addressed a luncheon of Sao Paulo business leaders, who interrupted his 40-minute address on several occasions with applause.
He again talked about the Constitution, calling it "terrible and outdated" and underscoring "that we need a new one." "I consider it the mother of all reforms," he added.
When asked during a panel discussion if he believed in the democratic process, Mourão said "if I were anti-democratic, I would not be participating in this election. I'd be home polishing my .45 pistol and waiting for better days." The line drew laughter from the crowd.
Asked about Bolsonaro's allegation the PT would try to rig the voting system to win, Mourão said that "you have to take into account he is a man who practically died just over a week ago."
However, Carlos Melo, a political scientist with Insper, a Sao Paulo business school, said Bolsonaro has raised that concern before and is doing so now as a "preemptive measure ... anticipating any defeat so he can question the results."
"Bolsonaro is a political actor who has never fully supported Brazilian democracy," Melo said. "His choice of Mourão as a running mate obviously adds another element that puts pressure on our democracy."
For Sergio Praça, a political scientist at the Getulio Vargas Foundation, a leading Brazilian university, the most present danger would be any attempt by Haddad to pardon Lula.
"Until a few days ago, I would have said that any threat against Brazilian democracy was a joke," he said. "Now, there is a tense vibe. The rhetoric from Bolsonaro's running mate is highly unusual, it is not normal.
"But what worries me the most is any pardon of Lula. Not because I want to see Lula in prison for a long time, but because it would be a serious blow against the judicial system that would provoke enough support within civil society for a military coup."