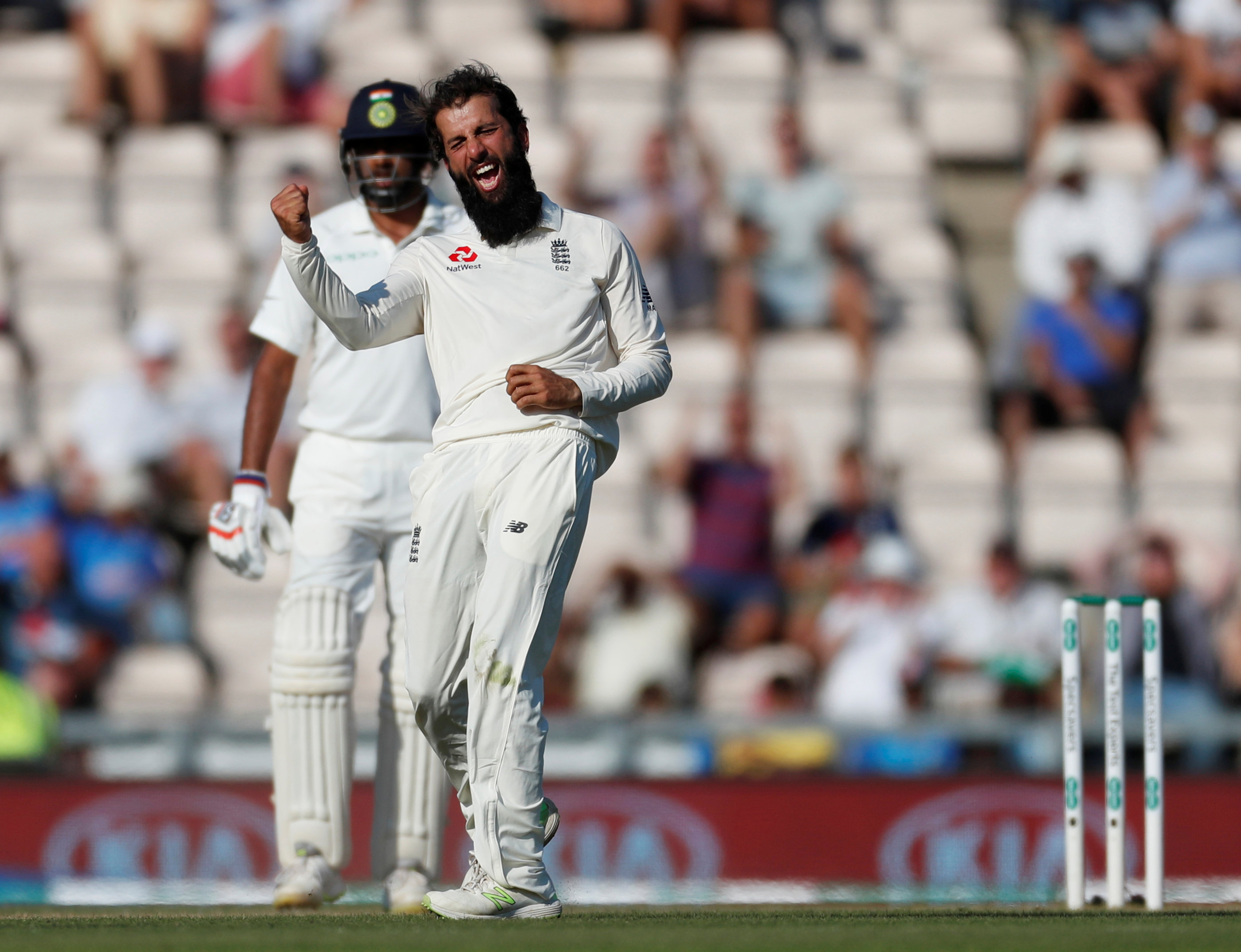 SOUTHAMPTON, England: Moeen Ali spun England to a 60-run victory over India in the fourth test as the hosts sealed a series victory over the world's top-ranked nation with a match to spare on Sunday.
Set 245 for a series-levelling victory, India were bowled out for 184 with the recalled Moeen taking four for 71 to go with the five wickets he took in India's first innings.
None was more crucial than that of India skipper Virat Kohli who shared a gritty 101-run fourth-wicket partnership with Ajinkya Rahane after India had slumped to 22-3.
Kohli, who survived an early review against Moeen, looked set having reached a patient 58 but he fell to the off-spinner just before tea.
India's last six wickets went down for 51 runs and although Ravi Ashwin blazed away for 25 to hold England up he was eventually trapped lbw by all-rounder Sam Curran.
England lead the series 3-1 with one match to play.
Skipper Joe Root praised his side's strength of character after they had slumped to 86-6 on day one and picked out Moeen's return as key.
"I think today it was the best I've ever seen him bowl in an England shirt," Root said of all-rounder Moeen who was left out of the opening three matches of the series.
"Credit to the group. We were really up against it on that first morning. Couldn't be more proud of the group."
India began the day by ending England's second innings for the addition of only 11 runs to leave an absorbing test balanced on a knife edge.
While 245 looked reachable, a worn pitch together with India having only three times successfully chased 200 plus for victory outside Asia meant the odds favoured England.
England seamers James Anderson and Stuart Broad took full advantage of the helpful conditions to rip out India's top order -- leaving the visitors' hopes in tatters.
In the third over KL Rahul had his off stump removed by a full-length Broad delivery that shot through at ankle height.
Anderson sent Cheteshwar Pujara, whose century helped India establish a small first-innings lead, back to the pavilion lbw after rapping him on the back thigh with an inswinger.
Squared Up
Opener Shikhar Dhawan struck three boundaries in his 17 but fell in next over, thick-edging to Ben Stokes at gully after being squared up by a beauty to leave India reeling on 22-3.
Kohli and Rahane both got the benefit of reviews, however, as the visitors limped to lunch on 46-3.
England were incensed not to have Kohli out lbw off Moeen after replays failed to show conclusively that the master batsman had got an edge.
After lunch Kohli began to work singles and twos with Rahane also showing good technique against spin duo Moeen and Adil Rashid and India's fans in the ground began to dream of victory.
There was no panic from England, though, and with tea approaching Moeen got the prized wicket of Kohli.
Having just seen Kohli survive a half chance from his previous delivery, Moeen got another ball to climb out of the rough and catch the glove before looping up into the grateful grasp of Alastair Cook at short leg.
Kohli looked deflated as he trudged off and shortly after tea India were in deep trouble as Hardik Pandya edged a rising Ben Stokes delivery to second slip where Root took a great catch.
Rishabh Pant mounted a brief attack with a feisty 18, launching Moeen for a six, but his aggression cost him as he holed out to Cook in the deep.
When Moeen pinned Rahane lbw for 51 India's last hope had gone. Stokes got his second wicket by removing Ishant Sharma for a duck and Moeen had Mohammed Shami caught slogging.
"England were braver in tough situations than us," Kohli said at the post-match presentation in which Moeen was named man-of-the-match. "It's been a very competitive series and we will not throw in the towel in the last game."