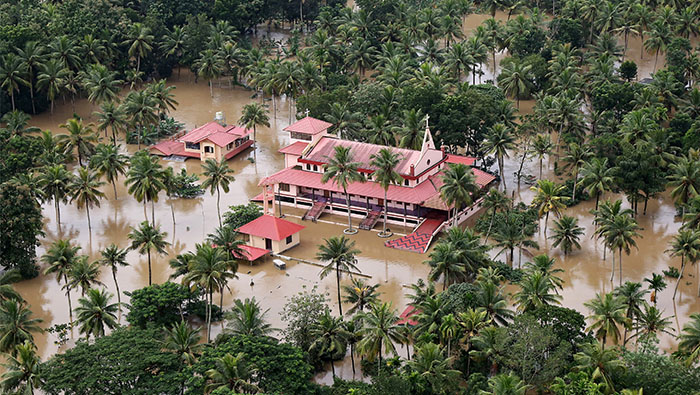 Muscat: India's Prime Minister Narendra Modi will head to flood-ridden Kerala to "take stock of the flood situation", the Prime Minister announced on Twitter.
The death toll in the Indian state has drastically risen and according to several media houses in the country, the Indian Meteorological Department has announced that the flood situation could worsen, as more rains are expected in the next few days.
According to the Kerala Chief Minister's office, a total of 324 lives have been lost and over two lakh people have been displaced as the Indian state is reeling under one of the worst flood situations it has faced in 100 years.
The Kerala CMO's office said, "Kerala is facing its worst flood in 100 years. 80 dams opened, 324 lives lost and 2,23,139 people are in about 1500+ relief camps. Your help can rebuild the lives of the affected."
Meanwhile, India's Prime Minister Narendra Modi tweeted, "Leaving for Kerala to take stock of the flood situation in the state."
The Prime Minister had earlier tweeted that he had spoken to Kerala's Chief Minister, he said, "Had a telephone conversation with Kerala CM Shri Pinarayi Vijayan just now. We discussed the flood situation across the state and reviewed rescue operations. Later this evening, I will be heading to Kerala to take stock of the unfortunate situation due to flooding."
Currently, the Indian Air Force and other teams are carrying out rescue operations. However, thousands are still stranded in inaccessible places without any help or food.