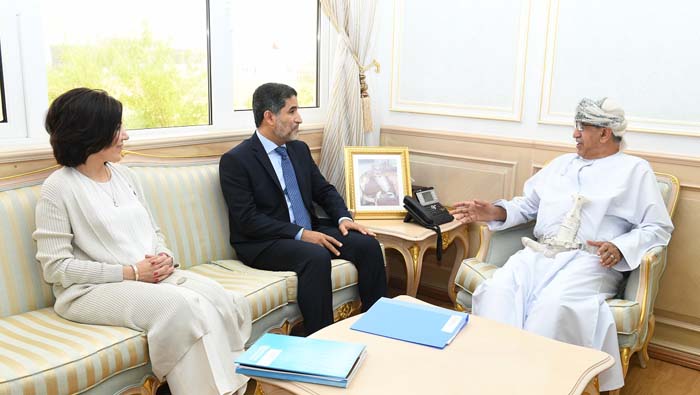 Muscat: Dr. Ahmed bin Mohammed Al Saidi, Minister of Health received in his office yesterday Dr. Ahmed Al Mandhari, Director General of World Health Organization (WHO) for the Eastern Mediterranean Region on his first official visit to Oman since he took office in June.
The two sides exchanged cordial conversations and cooperation aspects between the Ministry and the WHO.
They also reviewed the roadmap of the WHO work in the Eastern Mediterranean Region, as well as the Regional Meeting “The Road to the Universal Health Coverage in the Eastern Mediterranean Region” which will be organised by the WHO in collaboration with the Ministry in September.
Dr. Al Mandhari praised the health care system in the Sultanate as one of the successful models in the world.
The meeting was attended by Dr. Akjemal Magtymova, WHO Representative to the Sultanate along with a number of senior officials at the Ministry of Health.
Oman to host EMR meeting in September
The Sultanate, represented by the Ministry of Health (MOH) is preparing to host the Ministerial Meeting "The Road to the Universal Health Coverage in the Eastern-Mediterranean Region (EMR)".
The meeting, which will be organised by the World Health Organization (WHO) in cooperation with the Ministry of Health, will be held in Salalah during 3 – 5 September.
Around 22 EMR countries including ministers of health, a number of senior officials from the financial and parliament sectors, consultants, advisors and experts, representatives of international bodies and associations, UN and non-governmental organisations related to the WHO, as well as the national health institutions will participate in the Meeting.
This meeting is one of the most important meetings at the international level, in which it represents the highest guiding authority in the global health system. Issues related to the universal health coverage will be discussed during the ministerial meeting.