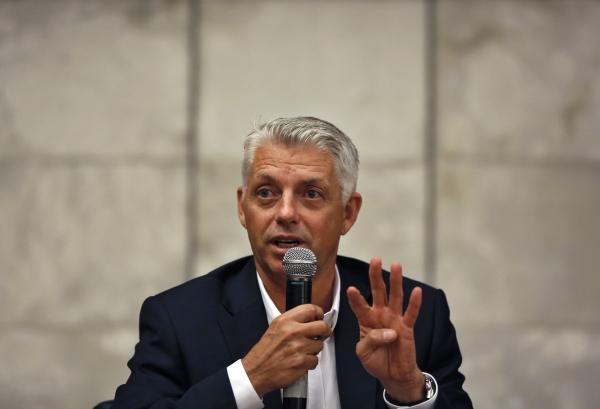 LONDON: Ball-tampering, verbal abuse and on-field confrontations are threatening the spirit of cricket and recent poor behaviour by players has to stop, International Cricket Council (ICC) boss David Richardson has said.
Richardson also took aim at players claiming confusion over ball-tampering rules, saying the laws were clear and their complaints "disingenuous" in a speech at the MCC's Colin Cowdrey Lecture at Lord's.
"The phrase 'it's just not cricket' is not an accident, it’s because cricket’s DNA is based on integrity and people know that cricket represents something more than a game," Richardson said.
"We have seen too much behaviour of late that puts that in jeopardy and it has to stop.
"Sledging that amounts to no more than personal abuse, fielders giving send-offs to batsmen who have been dismissed, unnecessary physical contact, players threatening not to play in protest against an umpire’s decision and ball tampering.
"This isn’t the version of our sport that we want to project to the world."
Cricket's image has taken a battering in recent months, with former Australia captain Steve Smith and two of his players slapped with long bans for the Cape Town ball-tampering scandal in March.
The same test series against South Africa was also marred by an off-field altercation between Australia's David Warner and Quinton de Kock, and a string of code of conduct violations by players on both sides.
Ugly incidents involving players undermining officials have also tarnished the game, with Bangladesh captain Shakib Al Hasan sanctioned after threatening to take his team off the ground over an umpiring decision in a Twenty20 match against Sri Lanka in March.
Sri Lanka captain Dinesh Chandimal, coach Chandika Hathurusinghe and manager Asanka Gurusinha were all sanctioned last month after the team refused to take the field for two hours in a June test match against West Indies in protest after Chandimal was charged with ball-tampering.
The ICC introduced tougher punishments for ball-tampering last month, but South Africa captain Faf du Plessis, who has twice fallen foul of the rules, remarked that he needed more "clarity" over what was permitted.
Richardson said the rules were already clear enough.
"Over the last few months I’ve read comments from players requesting guidance on what is allowed in relation to the ball," he said.
"Asking if they can chew gum, wear sunscreen or drink a sugary drink, and to be brutally honest, I find this a little disingenuous.
"The laws are simple and straightforward - do not change the condition of the ball using an artificial substance.
"If you are wearing sunscreen, sucking a mint or chewing gum with the intent of using the cream or sugary saliva on the ball, you are ball-tampering."