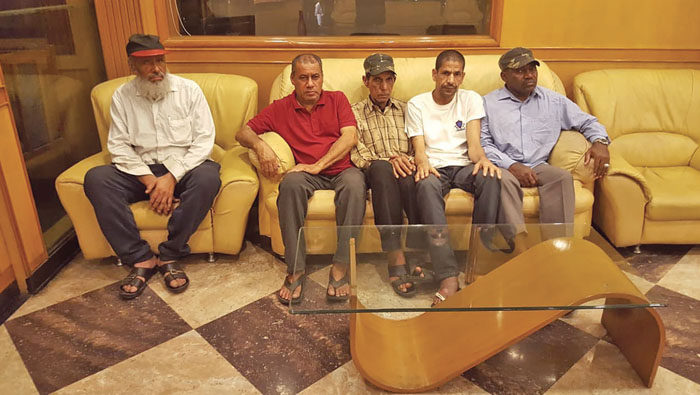 Muscat: Even as the trial of the Omanis detained in India has been postponed for the 11th time, the Omani ambassador in India has reassured the detainees that their case will soon be resolved.
The next trial is scheduled for August 16, 2018. “The following trials will be accelerated, and the case is on its way to being resolved,” Sheikh Hamed Al Rawahi, Oman’s Ambassador to India, told the Times of Oman.
Al Rawahi added: “The embassy has appointed an efficient lawyer to pursue the case. The lawyer expects the case to end soon. I hope things go as expected.”
“We obtained a ruling from the Supreme Court of India, where the Court of First Instance closed the files of five citizens within three months, in addition to the sixth citizen, who was previously acquitted of the charge of marriage to a minor and his second case is now on the right track. It is a complex issue that lasted for almost four years,” Al Rawahi said.
He also pointed out that the Oman government is covering the detained with a daily amount, as well as treatment expenses and needs, through the Omani Embassy in India, “All the Omanis have been released and none of them are in jail, contrary to what some people think. The Indian authorities are holding the passports of the suspects, and so, they cannot travel.”
Al Rawahi said: “For the detainees in the case of violation of the Indian Marriage Law, they are not only from the Sultanate, but also from several other countries, including the GCC states, and from India. This is an implementation by the Indian government as part of a major campaign to control the marriage law after many cases of abuse were reported.”
“The campaign included the criminalisation of a number of minor mothers and fathers, as well as more than 50 Indian judges and lawyers. It is a large and organised campaign to control this phenomenon that has been persisting for many years,” Al Rawahi added.
The eight Omanis detained in India in September 2017 say they are “medical tourists” who have been “wrongly accused” of marrying minors; three of them were released in March and the rest hope they will be free soon.
The Oman embassy in India said in a statement: “A clarification to Omanis who are following the case of the Omani citizens in Hyderabad.... The government is very close to its citizens and is well aware of the steps it is taking. The postponement of the August 3 trial was attended by one of the diplomats and has its legal justifications and it came as a normal procedure.”
Oman Human Rights Commission (OHRC) had earlier urged Indian authorities to either expedite the case or to set those detained free. “OHRC hopes that the Indian authorities will continue to provide sufficient guarantee to protect the rights of the Omani detainees in India and accelerate their trials without any further delay, especially as one of them has been in detention since April 2014,” a statement by the commission read.
According to the commission, those who haven’t been proven guilty need to be sent back to Oman immediately. “The commission also hopes that those detained without proof of having committed the crime of marrying a minor will be acquitted,” the statement read.