'Dusty conditions in Oman to clear up in three days' 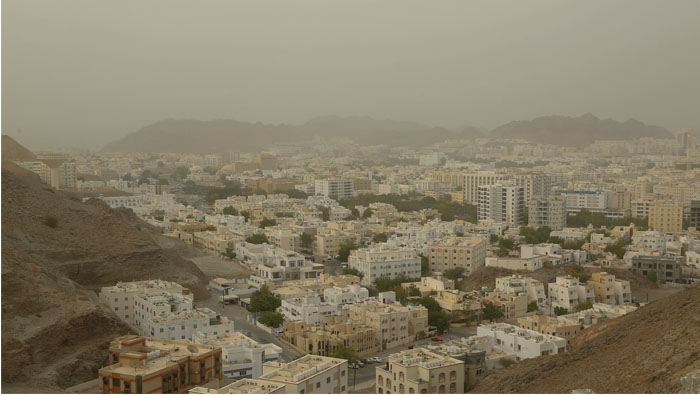 Muscat: Airborne dust particles that have covered parts of Oman are expected to clear up in three days, according to an expert from the Public Authority for Civil Aviation’s (PACA) Meteorology Department.
The official revealed that the hazy weather is due to northwesterly winds coming in from the Rub Al Khali desert, most of which is in Saudi Arabian territory.
“The weather has been hazy due to the northwesterly winds coming in from the Rub Al Khali desert in Saudi Arabia,” said the official.
“However, the direction of the wind has now changed and the southeasterly winds are coming in from the Arabian Sea, which will clear the air in a maximum of three days.”
Some regions in Oman were more affected by the dust than others. “As we suggested in a Twitter post, some parts of the country were affected more than others,” he added.
“The western part of Dhofar, the desert region, was affected, apart from Wusta and Dakhliyah. The Sharqiyah governorate has also been affected.
“Northern governorates such as Muscat and Batinah were not as badly hit,” he said.
“In fact, things are already beginning to improve in these areas.”
The expert added that visibility in Ibri was the worst among major cities.
“Visibility in Ibri is some 1,200m,” he said. “This is because of the city’s proximity to the Rub Al Kahli desert, which is where the winds are blowing from. In other cities, the visibility is around 4,000m.”
The official added that PACA usually refrains from giving advice when similar conditions occur, as they are common in the region. However, he said it would be advisable for children to be cautious.
“In such hazy conditions, it would be better for people, especially children, to not venture out,” he remarked. “If going out is essential, covering your mouth with a cloth would be a good idea.”
Another official from PACA’s Meteorology Department said it would be more prudent to refer to present conditions as “hazy” or “dusty”, rather than as a dust storm. “This is common in our part of the world,” he explained. “The dust is covering the upper surfaces of the air and its effect on the lower levels is much less. So there’s nothing to worry about as conditions are likely to start improving in another 24 hours, God willing.”