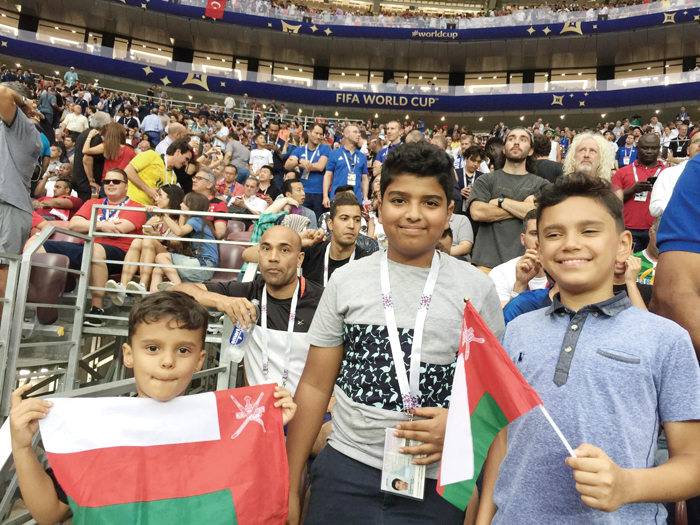 #ReadersResponse: France’s ambassador to Oman said the French nation will be celebrating for a long, long time after winning the 2018 FIFA World Cup.
France beat surprise finalists Croatia, 4-2, in the final of the World Cup at the Luzhniki Stadium in Moscow to close out what was a very entertaining tournament in Russia. The win marked France’s first World Cup win in 20 years and their first appearance in a final since 2006.
“First of all, I am happy because this is the sort of event that is going to bring much joy to my country,” said Renaud Salins, French Ambassador to Oman. “There is something special about football. In that it is not going to change everyone’s life, but it will make everyone happy for several days, weeks, months, and years.”
“This is about a feast of solidarity, it is about playing together, it is about victory; France won the World Cup 20 years ago for the first time, and this is the second time,” he added. “We are increasing our legitimacy in that tournament. The incredible thing about this team is that you have guys who are 19, who weren’t even born during the first World Cup, and then you have the oldest guy at 31.”
**media[905299]**
In winning the World Cup, France coach Didier Deschamps became only the third man to win the trophy as both player and coach. Deschamps was the captain of the French squad that won the 1998 tournament.
“You have two generations of people; this team was assembled a few months ago and it worked because we won the World Cup,” remarked Salins. “After so many years of sadness and sorrow in France, the French needed something good to happen to them and this is what has happened.”
After a Mario Mandzukic own goal opened the scoring for France, Croatia hit back through a sublime Ivan Perisic equaliser, only for the referee to award Les Bleus a penalty after consulting with the Video Assistant Referee (VAR) team. Muscat Football Academy head coach Chuck Martini said taking such a bold decision in a World Cup final took guts.
France would score more goals through Paul Pogba and Kylian Mbappe, with Mandzukic pulling one back for Croatia after a dreadful mistake by French goalkeeper Hugo Lloris.
**media[905300]**
“I believed France was going to be the stronger nation, and I felt Croatia dominated the game in the first half, but France looked very dangerous on the counter,” said Martini. “I think the VAR decision was a bit harsh, because I don’t think Perisic did that intentionally. It was a very tough decision to make in the World Cup final with the game tied at 1-1. France had some serious weapons such as Antoine Griezmann and Mbappe, and they exposed a lot of teams’ weaknesses at the World Cup.”
Juventus Oman coach Gerald Lami also singled out Mbappe for praise. The 19-year-old winger was awarded the best youth player award at the World Cup.
“We’ve also got Kylian Mbappe to look out for in the future,” he said. “He is the next one to take the throne, and has won the Young Player of the Tournament award. At just 19, he is a very, very good player, and he has the opportunity to become the best player in the world. I think the smaller nations have surprised the bigger teams at the World Cup and they are not afraid to play against them anymore.”
Football lovers in Oman were also happy to have witnessed such an entertaining World Cup.
“I didn’t actually see a clear favourite at this World Cup,” said expat Rajesh Shankar. “I would’ve picked France to win, but it was disappointing to see the way Germany went out. Overall, it’s been a great World Cup.”
“I was actually gunning for Belgium,” added Zachary Anderson, an American expat. “Brazil were playing pretty well, until we all expected Neymar to bring the Samba flair. A lot of England fans believed they would beat Croatia, but that was the toughest team they’d faced so far. I was backing France as my second team.”
“My bet was on Brazil to win, because my favourite team Italy didn’t even qualify,” shared Saleh Al Anwar, an Omani national. “I then supported Brazil but they were quite ordinary as well, and as a Manchester United fan, I supported France in the final because of Paul Pogba.”