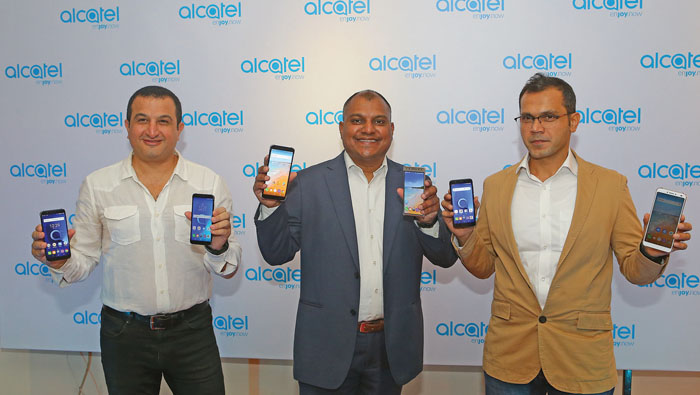 Muscat: Mobile company Alcatel introduced three new smartphones in Oman on Monday.
Company representatives said they hope to attract customers, due to the affordable prices of the new handsets.
The new smartphone models are the Alcatel One, Three and Five, and cost OMR30, OMR50 and OMR75, respectively.
Regarding the new phones, Rabih Faroun, training manager at Alcatel, said the three handsets were part of their One, Three and Five series, offering smartphones in three price ranges.
“The One series is more of a ‘M3 level’ smartphone, which offers the consumer a basic smartphone experience. The Three series is essentially an intermediate level smartphone, which falls in the value-for-money, affordable price group. Now, the Five series is lifestyle-oriented. It’s something that speaks to your personality. It has very high-end features,” he added.
Electronics company TCL and Gulf Oasis International were partners in the launch. Wali Khan, country manager, UAE and lower Gulf at TCL, said that they have a strategy to attract consumers in the region.
“We bank on the affordability of the phones, besides having a good distribution network and robust marketing,” Khan said.
Faroun said that Alcatel smartphones had a distinct advantage because of its 18:9 length-width ratio. “This gives one the advantage of scrolling less, as you are dealing with a larger screen. You can use the large screen to operate two apps at the same time. They are also compact, so they’re easier to hold in one hand,” he added.
The Alcatel training manager pointed out that there were key features that made Alcatel phones a great choice for consumers in Oman.
“Besides being really affordable, many of these phones have features, such as face recognition, fingerprint recognition and a smart camera, which expands the frame it is covering upon recognizing more than three faces. It’s handy for ‘group-fies’, as opposed to selfies. “Our phones come in flagship designs, as well. The body is either metallic, which is tough, or fiber, which is glossy and suede, which is quite soft and comfortable,” he said.
“Moreover, you can use your five fingers as five different passwords for five apps. One can even put the phone in private mode, before someone borrows it,” he added. Mohammad Faisal Affan, Gulf Oasis International general manager, said that Alcatel still offered tablets in the range of OMR24 to OMR48, which, he said, remains a good deal in the region.
“Features such as eye protection, parental controls and restricting time of usage makes these tablets children-friendly,” Affan added.