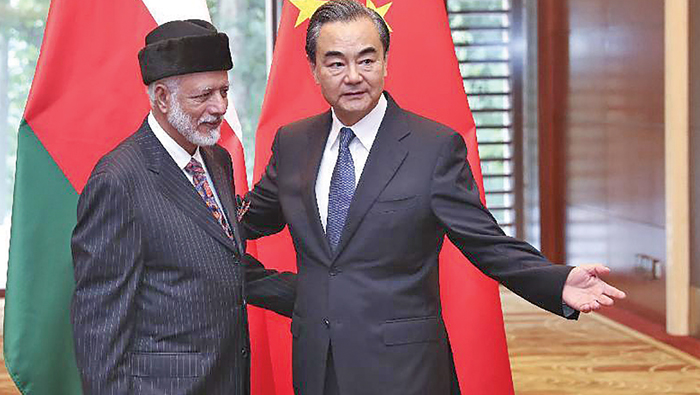 Beijing: Yousuf bin Alawi bin Abdullah, Minister Responsible for Foreign Affairs conducted talks in Beijing with Wang Yi, Chinese Foreign Minister.
The aim of the talks was to enhance areas of the joint cooperation in different fields.
The Minister Responsible for Foreign Affairs, who is attending the eighth ministerial meeting of the China-Arab States Cooperation Forum (CASCF), said that the Sultanate appreciates and actively supports the ‘Belt and Road’ initiatives and hopes that it will enhance cooperation with China in money, investment, tourism and other fields to achieve the joint interests.
On his part, the Chinese Foreign Minister said that his country and the Sultanate should continue supporting each other to achieve the essential interests and accelerate the building of the joint belt and road, as well as enhancing the financial and industrial cooperation.
The 8th ministerial meeting of the China-Arab Cooperation Forum, was held on Tuesday under the patronage of President Xi Jinping of the People’s Republic of China in the presence of His Highness Sheikh Sabah Al Ahmed Al Jabir Al Sabah, Emir of Kuwait, who headed the Arab delegations taking part at the Forum and the Arab League’s Secretary General.
The Sultanate’s delegation was led by Yousuf bin Alawi bin Abdullah, Minister Responsible for Foreign Affairs.
The Chinese President Xi-Jinping delivered a speech calling for setting up strategic relations between China and the Arab countries based on comprehensive cooperation and joint development.
While delivering the keynote speech at the 8th meeting of the China-Arab Cooperation Forum, President Xi-Jinping said that the Arab countries are key partners in the Belt and Road Initiative. He affirmed that the initiative has achieved fruitful results and contributed to developing the Arab-Chinese relations. -ONA