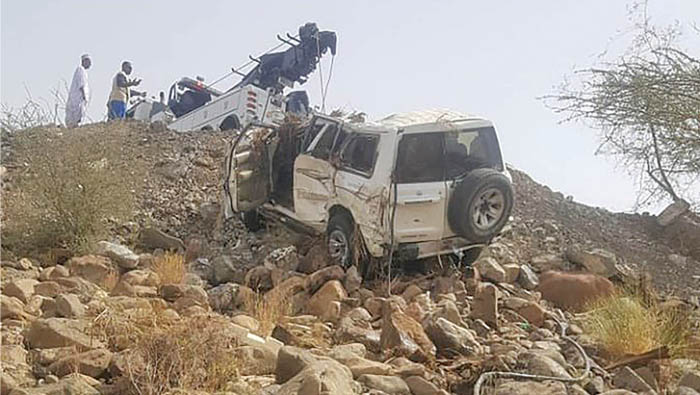 Muscat: Oman’s rescue and emergency services have asked the public not to risk their lives, and the lives of others, by driving through wadis flooded with torrential running water.
Many parts of the Sultanate have received heavy rainfall over the past few days. With more expected in the coming days, the Royal Oman Police (ROP) has had to take action against wadi drifters, after a clip of one such incident was widely circulated on social media. “With regard to the video clip of a citizen who risked crossing the valley during yesterday’s march in the Wadi Muharam area in the state of Samail, the police wishes to explain that the person was brought in and will face legal procedures governing this area, which will be taken against him,” said the ROP.
Video: Driver attempts dangerous wadi crossing, arrested
“The police call upon everyone to abide by the laws and not to cross the valleys.”
Under Oman’s traffic laws, deliberately entering a wadi is an offence punishable by a large fine and jail sentence.
“Stop and do not take this risk!” warned the police. “If the driver of the vehicle deliberately crosses wadis, endangering his life or the lives of passengers with him, he shall be punished by imprisonment for a term of not more than three months and a fine of OMR500, or one of these two penalties, according to Article 8/49 of the Traffic Law.”
“Dear citizens and residents, the risk of crossing the valleys while they are overrun with floodwater puts your life and the lives of others at risk, and makes you legally accountable, so encourage yourselves to practice good behaviour and become role models for others,” added the police.
To prevent similar incidents in the future, the ROP and the Public Authority for Civil Defence and Ambulance (PACDA) have already deployed patrols and rescue teams in areas close to wadis.
“As part of efforts by the police in the province of Buraimi, police patrols have been assigned to monitor the roads and streams of valleys and reefs after rainfall was recorded in the province this afternoon,” said the ROP.
“Drivers are advised to be careful while driving in the rain and not take any risks by crossing the valleys.” The police have also issued warnings in the wake of poor weather in some areas across Oman.
Batinah Expressway
“There is a marked decrease in the horizontal visibility in the Batinah Expressway,” said the police.
“The Directorate General of Traffic urges everyone to take caution while driving. To the drivers of vehicles, be careful and take all precautions whenever visibility levels are low.”
Similar precautions have also been taken by PACDA.
“Rescue teams from the Department of Civil Defence and Ambulance are already in place in the province of Buraimi to secure roads that cross the valley of Sharm in the state of Muhaddah, in anticipation of heavy rains and flooding in the state,” said PACDA officials.
PACDA is also initiating efforts to make people aware of the dangers of wadi drifting in Oman’s southern governorate during the Khareef season, which is characterised by abundant rainfall and flooded wadis. “We are continuing the efforts of the Department of Civil Defence and Ambulance in the Governorate of Dhofar to educate visitors and secure various tourist sites,” added PACDA.