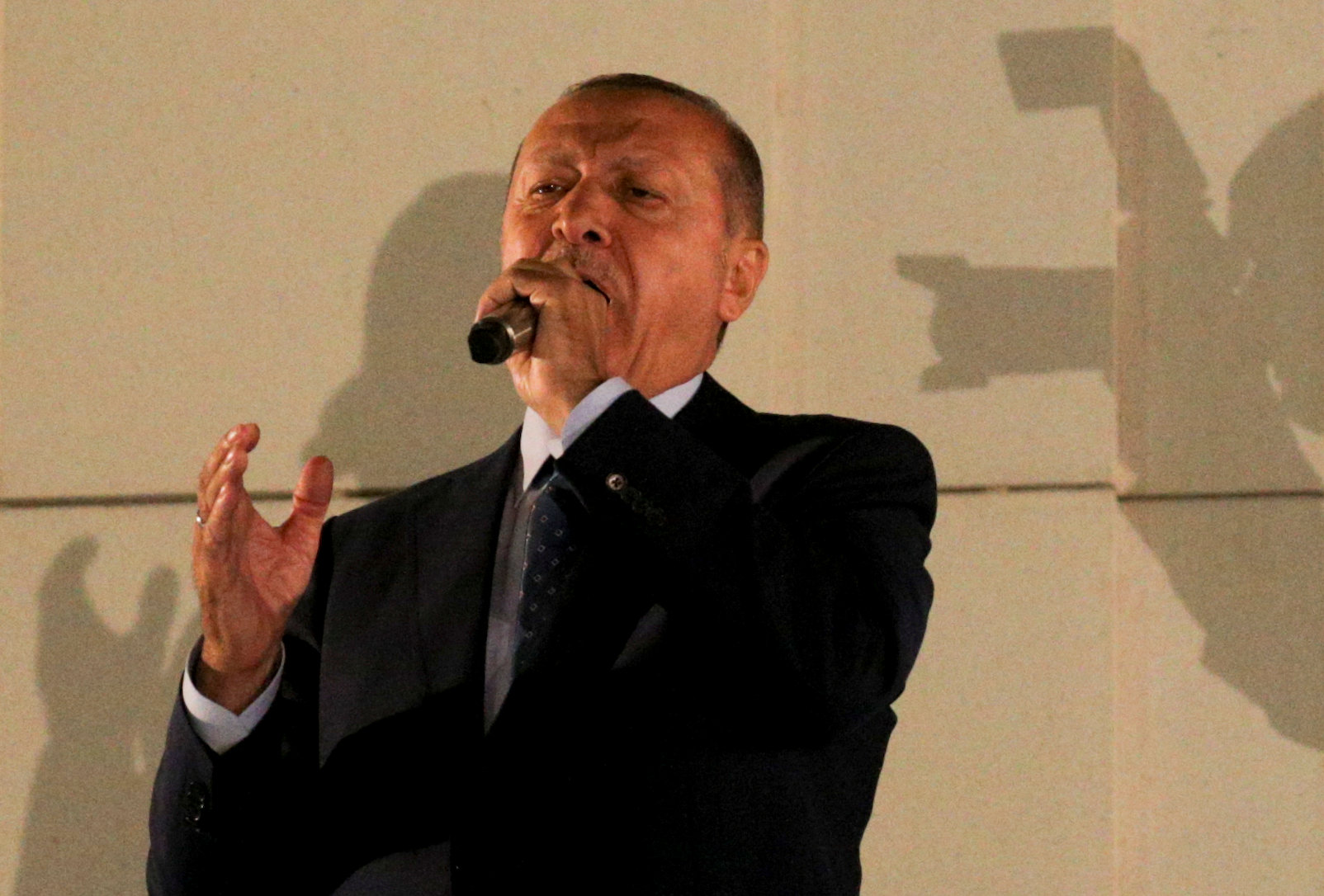 Ankara: Turkish President Tayyip Erdogan could give his nationalist allies cabinet posts, sources said, rewarding their support for his AK Party in parliament and signaling a tough line against US-backed Kurdish fighters in Syria and militants at home.
Erdogan won 53 per cent of the vote in Sunday's presidential election, extending his rule until at least 2023 - but now with the sweeping executive powers that Turks narrowly backed in a referendum last year.
The ruling AKP he founded fared less well, taking 43 per cent in the parliamentary election held on the same day. But, allied with the hard-right Nationalist Movement Party (MHP), which won 11 per cent, it will have a parliamentary majority.
The AKP, a pro-business party, which in its early years in power from 2002 appealed to the centre-right and worked to bring Turkey closer to Europe, is now allied with a deeply nationalist party suspicious of foreign powers.
The MHP, founded by an ex-colonel involved in a 1960 military coup, is hostile to the Kurdish political movement and its base is seen as closely tied to the "Grey Wolves", a nationalist youth group that fought street battles with leftists in the 1970s. Mehmet Ali Agca, who tried to assassinate Pope John Paul II in 1981, was a member of that movement.
"It is possible for there to be some names close to the MHP that the president deems appropriate in the cabinet," an MHP official said, adding: "In the end, Erdogan will decide."
A source close to Erdogan's office said it would "not be a surprise" if the president appointed ministers close to the MHP to Turkey's new cabinet.
Both sources spoke on the condition of anonymity. Erdogan's office declined to comment. The MHP's deputy chairman, Mustafa Kalayci, said any cabinet decisions would be taken by Erdogan.
"We will not have any expectations such as 'We gave you this support, so give us five ministries'," Kalayci told broadcaster CNN Turk.
Together, the two parties won 343 of parliament's 600 seats, according to unofficial results. Although parliament has lost some of its powers under the new executive presidency, an opposition-controlled assembly would have been able to slow down lawmaking for Erdogan.
For the AKP, the alliance marks the culmination of a drive to woo nationalist voters that began in earnest after a 2015 election setback and intensified after a 2016 attempted coup.
Nationalist sentiment has also been bolstered by security operations against Kurdistan Workers Party (PKK) militants in the mainly Kurdish southeast and a campaign against US-backed Kurdish fighters in Syria.
"Having failed to secure a parliamentary majority, Erdogan, who has to rely on support from the far-right MHP, will be hostage to their hardline agenda," said Aykan Erdemir, a former lawmaker from the secular opposition and a senior fellow at the Foundation for Defense of Democracies.
"Turkish nationalism, in part fuelled by the rise in anti-Kurdish sentiment, is the real winner in the twin elections."
The government rejects any notion that anti-Kurdish sentiment informs its policies. The AKP has broad support among conservative Kurds in the southeast.
In his victory speech, Erdogan pledged that authorities would act more decisively against terrorists - the country is already in the throes of a crackdown since the coup. Turkey's forces would continue to "liberate Syrian lands", he said.
Ankara's operation against the YPG Kurdish militia in northern Syria has complicated relations with the United States, a NATO ally. Turkey sees the YPG as an extension of the outlawed PKK. Washington has backed the group in the fight against IS.
The MHP's head, Devlet Bahceli, has warned that Turkey is surrounded by enemies, singling out the Kurdish militants at home and the fighters in Syria.
"Turkey is facing economic attacks and international conspiracies," he said at a recent rally. "If we don't unite ourselves, we are doomed to suffer bitter results."
There have also been signs of differences in policy.
Erdogan has promised to soon lift the state of emergency that was imposed after the 2016 attempted coup.
It limits some freedoms and allows the government to rule by decree, bypassing parliament. Critics say it has been used to stifle dissent.
But Kalayci, the MHP deputy chairman, has said emergency rule should continue.
In a separate twist on Wednesday, the MHP said it had dismissed a deputy leader, Sefer Aycan, without giving a reason. Media reports cited Aycan as telling party members on Tuesday that the MHP had "saved" Erdogan and would now use its strengthened position in parliament to enforce its views.