U.S. to slap tariffs on steel, aluminium from EU on Thursday -sources 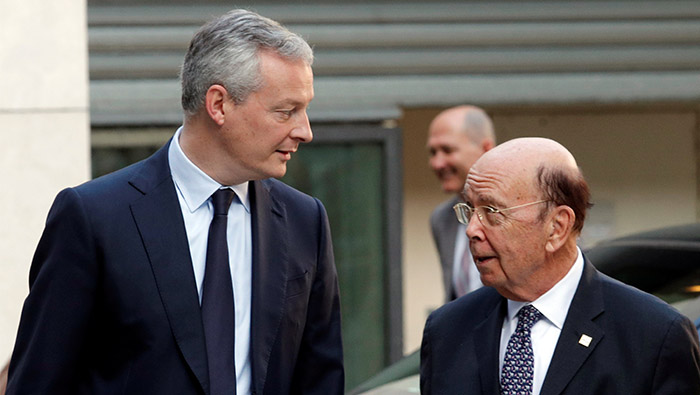 Washington/Paris: Washington will announce plans to slap tariffs on EU steel and aluminium imports as early as Thursday morning, sources said, while the U.S. commerce secretary said any escalation of their trade dispute would depend on the bloc's reaction.
The two sources briefed on the matter said the decision would land before a Friday expiration deadline for exemptions to the planned tariffs.
They said the announcement was planned for Thursday morning in Washington but that the timing could still change. Commerce Secretary Wilbur Ross told French daily Le Figaro it would be announced either before markets opened or after they closed.
While not confirming directly that the U.S. would decide to impose tariffs, he said: "It's up to the European Union to decide if it wants to take retaliatory measures. The next question would be: how will the (U.S.) President (Donald Trump) react? You saw his reaction when China decided to retaliate.
"If there is an escalation it will be because the EU would have decided to retaliate," he said, adding that Washington did not want a trade war with the EU.
French Finance Minister Bruno Le Maire, whom Ross was scheduled to meet in Paris on Thursday morning, said on Wednesday that the EU did not want a trade war either but would respond if Washington imposed tariffs.
In March, Trump imposed a 25 per cent tariff on steel imports and a 10 per cent tariff on aluminuum, but granted temporary exemptions to the EU, Canada, Mexico, Brazil, Australia and Argentina.
Trump invoked a 1962 trade law to erect protections for U.S. steel and aluminium producers on national security grounds, amid a worldwide glut of both metals that is largely blamed on excess production in China.
The European Commission, which coordinates trade policy for the 28 EU members, has said the bloc should be permanently exempted from the tariffs since it was not the cause of overcapacity in steel and aluminum.
The Commission has said the EU will set duties on 2.8 billion euros ($3.4 billion) of U.S. exports, including peanut butter and denim jeans, if its metals exports to the United States worth 6.4 billion euros ($7.5 billion) are subject to tariffs.
The tariffs, which have increased friction with U.S. trading partners worldwide and prompted several challenges before the World Trade Organisation, are aimed at allowing the U.S. steel and aluminum industries to increase their capacity utilisation rates above 80 per cent for the first time in years.
Economists say the standoff with the EU could tip towards a trade war, particularly after Trump last week launched another national security investigation into car and truck imports that could lead to new U.S. tariffs.
The Trump administration has given permanent metals tariff exemptions to several countries including Australia, Argentina and South Korea, but in each case set import quotas.
Friday's deadline for exemptions also affects Mexico and Canada, which are in negotiations with the United States on the North American Free Trade Agreement that Trump has said he wants to revamp, or abandon if the talks fail.