A memorable night for IPL fans with T FM 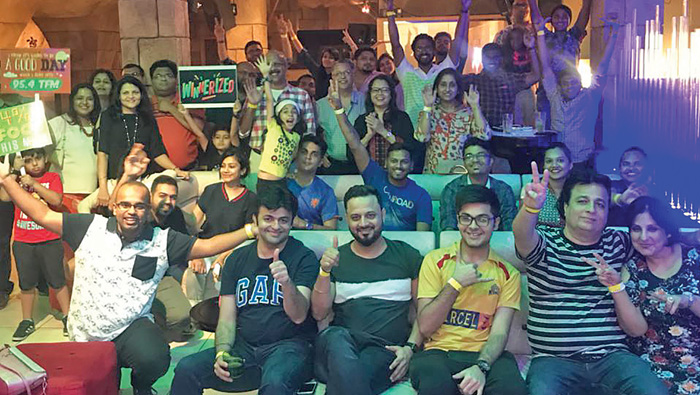 Muscat: Times of Oman’s radio station, T FM 95.4, ensured that some of Oman’s most ardent cricket lovers got to watch the finals of the 2018 edition of the Indian Premier League (IPL) in style.
“Here in Muscat, the T FM 95.4 team along with some lucky winners of the IPL Contest watched all the action of the final match on a big screen at Rumba Lattina, and got a chance to savour a lavish Iftar spread at the venue,” said Garima Bhandari, station manager for T FM.
“As the 11th edition of the IPL headed into the final game, Sunrisers Hyderabad were all set to battle it out against the Chennai Super Kings in the final match that was played on Sunday,” she added. “The atmosphere at Wankhede stadium, where the match was being played, was exhilarating to say the least. The atmosphere was surreal and excitement brewed in the air with the crowd cheering on every hit, six and miss during the game.”
In the end, the ones supporting Chennai walked away with a big smiles on their faces as the Chennai Super Kings clinched the title for the 3rd time.
After a slow start, it fell to New Zealander Kane Williamson (47) and former India all-rounder Yusuf Pathan (45*) to contribute runs to the Sunrisers, who batted first. With Shakib Al Hasan, Shikhar Dhawan and Carlos Braithwaite all contributing, Hyderabad managed to put up a score of 178/6 after their 20 overs.
Matches in this season’s IPL have primarily been of a high-scoring nature, even if the finals seemed to lack the sort of score fans were expecting to see. What they did get instead was a run-chasing masterclass from Australian all-rounder Shane Watson.
With Chennai’s innings threatening to go off the rails at 1-16, after losing Faf du Plessis for just 10 runs, his fellow opener ensured the Super Kings stayed strong. Watson plundered 117 runs from just 57 deliveries, in an innings which included 11 fours and eight sixes, to put the Hyderabad bowlers to the sword.
It was Sandeep Sharma and Siddharth Kaul who faced the brunt of Watson’s innings, as they posted economies of 13.00 and 14.33 respectively. Al Hasan (15.00) and Braithwaite (10.8) were also expensive in the wake of Watson’s assault.