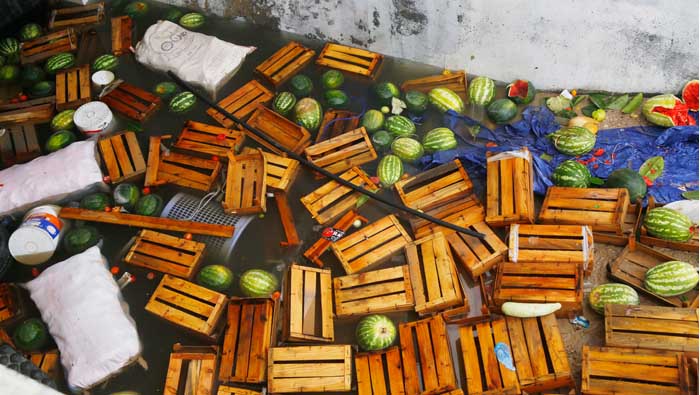 Muscat: Cyclone Mekunu did not send prices soaring, thanks to the price control measures put in place by the Public Authority for Consumer Protection (PACP).
The PACP had warned all suppliers against exploiting the situation caused by the tropical cyclone by increasing prices or by carrying out any acts contrary to the Consumer Protection Law and its executive regulations.
All commodities, including food and cooking gas are available in Dhofar, Oman’s National Emergency Management Centre explained. In an online statement, the centre said: “All commodities, basic food necessities and cooking gas are available in Dhofar. Moreover, all the stores in the governorate are in good condition.”
The Directors of the Department of Consumer Protection in Dhofar, Al Wusta and Al Mazyona, also confirmed that the officials were prepared to deal with the cyclone.
They said the availability of all essential goods had been verified and all suppliers had assured them they would not exploit the situation by increasing prices or by carrying out any acts contrary to the Consumer Protection Law and its executive regulations. Field teams had been formed and a number of inspectors and control specialists were going to be available in the area.
Some supermarkets had sold out water and food as residents prepared for the cyclone.
Ahmed Al Hadari, a Salalah resident, said he had to wait in a long queue as people rushed to buy commodities from a small market in Saa’da for a predicted heavy downpour.
People reported empty water shelves at supermarkets in Salalah and other wilayats.
The Ministry of Commerce and Industry had called on citizens not to overbuy commodities and essentials, and said fuel would be available at all filling stations. It had also said in a statement that it was following up with all government agencies in preparation for Cyclone Mekunu.
“The ministry is in direct contact with all commercial centres to provide all commodities during the tropical situation. The ministry invites citizens and residents in Dhofar and Al Wusta governorates to supply basic materials, and asks the citizens to avoid over-purchase as all materials will be available.
The ministry also asserts that all fuel distribution companies will continue to provide fuel at all stations in Dhofar and the Al Wusta governorate,” the statement read. The PACP call centre was ready to receive round-the-clock communication on its toll-free numbers (80077997-80079009) and was prepared to take action against offenders.