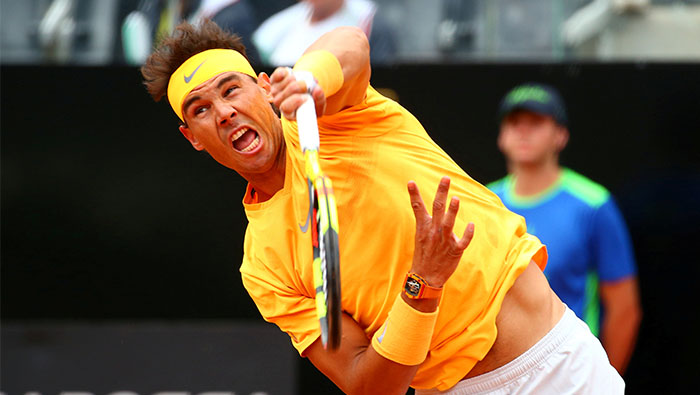 Rome: Rafael Nadal got his claycourt season back on track with a 6-1 6-0 victory over Bosnian Damir Dzumhur to reach the third round of the Italian Open on Wednesday, while sixth-seed Dominic Thiem suffered an early exit.
Nadal, who lost his number one world ranking after his 14-match winning run on clay was snapped by Thiem in the Madrid Open quarter-finals last week, was back to his best as he wrapped up victory with a blistering forehand winner.
"It was important, after a loss in Madrid, to come back strong," the 31-year-old, who received a bye in the opening round, said. "And that's what I did today.
"I went on court with the right intensity. I don't know how many mistakes I made, but not many. I also had control, more or less, of a high percentage of the points. That was the way that I wanted to play."
The Spaniard can reclaim the world number one ranking from Roger Federer if he wins a record-extending eighth title in Rome this week.
Thiem, who finished runner-up in Madrid on Sunday, struggled to find his rhythm in a 6-4 1-6 6-3 defeat by Fabio Fognini.
World number 21 Fognini, backed by a partisan Italian crowd, frustrated Thiem with well-placed lobs and touch volleys and went on to record his first win over the Austrian in three meetings.
Novak Djokovic, a four-time winner in Rome, powered into the third round with a convincing 6-4 6-2 win over Georgian Nikoloz Basilashvili.
The Serb will have opportunity to reach his first quarter-final of the season on Thursday, when he faces Spain's Albert Ramos-Vinolas.
Defending champion Alexander Zverev stayed focused on his way to a 7-5 6-2 win over Italian wildcard Matteo Berrettini.
The 21-year-old German recorded his 10th consecutive victory on clay, a streak which includes back-to-back title runs in Munich and Madrid. He will now take on British number one Kyle Edmund, who saved the only break point he faced in a 6-2 7-6(3) victory over France's Lucas Pouille.
Japan's Kei Nishikori denied Grigor Dimitrov a 27th birthday win to progress to the third round, rallying back from a set down to beat the world number four 6-7(4) 7-5 6-4.